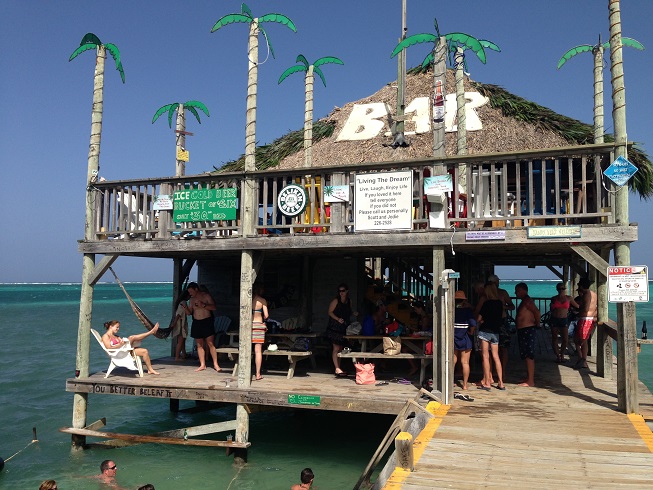 Jim and Lisa from Denver, Colorado couldn’t wait to start their  vacation.  They were heading for Belize’s pearl in the Caribbean.  Ambergris Caye is considered by many as being a diver’s mecca with its clear waters and abundant marine life. They  booked their seven day stayed at X’tan Ha resort. It is just a little over seven miles from Ambergris Caye’s main city of San Pedro. From Belize City there are two ways to get to Ambergris Caye. The first and less expensive way is by water taxi. With a stop in Caye Caulker, the one-way trip takes about an hour and a half. The second method is to fly. Both modes of transportation offer their own unique scenery. After the 20 minute plane ride to San Pedro’s “International” airport, which is no bigger than a small municipal facility, Jim and Lisa were off to their weeks retreat. The only way to get to their resort was by water taxi. The taxi sometimes makes frequent stops to let people on and off at the other resorts that line Ambergris Caye’s shore line. Depending on the time of day and how many stops, the ride could take up to 45 minutes. On their first trip to the resort, the taxi took Jim and Lisa non-stop to their resort’s private dock. With the palm trees gently swaying in the wind, white sandy beaches under foot and the clear turquoise water of the Caribbean Sea to their back, they knew that this was going to be a vacation to remember. Once they were shown to their room, they discovered the beautiful panoramic view from their balcony (pictured left). Can you say “Paradise”! It was time to start enjoying their vacation. Their first stop was a well deserved beer. The official beer of the island is called Belikin. It comes in a stout and a popular light lager. The beer is brewed by the Belize Brewing Company. The Belikin name comes from the Mayan language that means “Road to the East”. The brewery is based in Ladyville, Belize.

Jim and Lisa’s first trip into San Pedro was an adventures one. San Pedro has a estimated population of 13,381 according to the 2012 census. The San Pedranos speak both Spanish and English fluently. San Pedro has three main streets. They are Barrier Reef Drive (also known as Front Street), Pescador Drive (Middle Street) and Almond Street (Back Street). The main form of transportation, as Jim demonstrates is by golf cart and bicycle. Watch where you are driving Jim! Jim and Lisa took the road a mile and a half north from San Pedro and just over the bridge to a popular spot for vacationers and locals alike. It is called Palapa Bar and Grill. The beach bar offers fabulous views, gorgeous water and great food and libations. You can hangout in the relaxing atmosphere of the palapa style building, or grab a tube and enjoy your favorite beverage while floating in the clear waters just off the beach. If you ever get to Ambergris Caye and the city of San Pedro, it is definitely a place you want to visit.

On Wednesday Jim and Lisa wanted to be on the water. They found a dive shop that offered snorkeling trips. The trip also included a stop over on Caye Caulker island. They boarded a Catamaran and headed to Belize’s world famous Barrier The reef is part of the Mesoamerican Barrier Reef System. The reef is continuous from Cancun, Mexico up to Honduras. It is the second longest running barrier reef being just behind the Great Barrier Reef in Australia. There are two places that are very popular with snorkelers and shadow water diving and they are Shark Ray Alley and Hol Chan Marine Reserve. Shark Ray Alley has been recognized by Skin Diver Magazine as one of seven best “animal dives” in the Caribbean. As Jim and Lisa found out, there is plenty of Nurse Sharks to swim with. Especially when your guide bates the waters. Hol Chan Marine Reserve is a fascinating part of Belize’s Barrier Reef. Hol Chan is defined in Mayan language for “little channel”. The reserve is an aquatic sanctuary for numerous species of fish. Snorkeling or diving, you will be overwhelmed with all the marine life. The sting rays come right up to you and brush up against your body. They are as curious about you, as you are about them.

After Jim and Lisa’s underwater adventure, the tour guide went to a neighboring island called Caye Caulker. This little Caribbean island is about five miles long and less than a mile wide. It is a very laid back and  out-of-the way retreat for those who are not looking for a resort ridden island. The quaint little town on the island is called Caye Caulker Village. It has a variety of boutique and island grown shops. There are no surfaced roads and very few, if any traffic signs. Most the eateries are informal and have a casual style ambience. Jim and Lisa found a great place under a tree where a local cook offers a freshly caught and prepared seafood meal right on the beach.

Jim and Lisa’s day ended back at the resort to hang with a few of the locals. The evenings on Ambergris Caye are cooled by swept in ocean breezes and should be enjoyed with a tasty beverage. No one wants to leave, but it is enviable that you have to go back to mainstream life. Jim and Lisa are already talking about going back one day. Island life can be very habit forming.