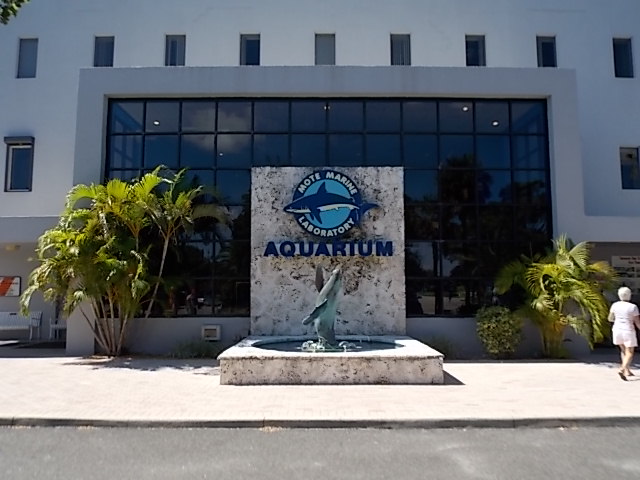 The Mote Marine Laboratory & Aquarium is an attraction that will be enjoyed by everyone in your group.


The research laboratory was founded in 1955 by Eugenie Clark. In 1967 it was renamed in honor of the financial contributions made by William and Lenore Mote and William’s sister Betty Mote Rose. The Mote Marine Laboratory is located on City Island. It faces the Sarasota Bay and offers a beautiful view of downtown Sarasota. The admission is $19.75 per person, $18.75 for seniors over 65, kids 4-12 are $14.75 and under 3 are free. You can find discounts in most of the local coupon books or papers. The tour is self directed, but there are volunteers along the way that will try to answer any questions you might have. wall-to-wall aquariums. Beautiful fluorescent tanks of colorful fish that can’t be clearly seen from the water’s surface are exhibited along the walls. There is plenty of marine life that fills the aquariums. The Seahorse aquarium attracted a lot of attention from the young and old alike. The tank was filled with many species of the fascinating horse like fish (pictured left and above). As you exit the aquarium building you enter an outside exhibit that has smaller tanks filled with aquatic fish that live closer to shore and swim in larger schools. There is also an exhibit that talks about Florida’s Gulf waters and the research being done on its dangerous red-tides. The Mote Marine Laboratory does more than study marine life. It researches issues such as the decline of our coral reefs and shifting tides. From here you enter the shark exhibit. This is where it gets real interesting. There are over 500 species of sharks in are world’s waters. The first sharks appeared in the oceans 440 million years ago. The one pictured right is a Gray Reef Shark and is approximately 6 feet in length. They like shallow warm tempered waters. They have been known to attack humans on several occasions. The two Nurse Sharks pictured left are nocturnal and spend most of the day in large inactive groups. They are bottom-dwelling and are practically harmless to humans. The tank also showcases a variety of fish including the Goliath Grouper, tarpons and other Florida Game fish. The 135,000 gallon tank has a walk-around viewing path. It also has a lower viewing section that is located just below the upper tanks viewing platform. There are aquatic petting exhibits located on both ends of the shark tank. They offer you the opportunity to touch sting rays, starfish and other crustaceans.

The marine’s research laboratories are located in this section of the compound. They are housed in the building across from the Sting Ray petting exhibit. There is a small snack bar and an outside patio to enjoy your refreshments.

From here you return to the entrance and ticketing area. You leave the building and proceed down the walkway to the street. You cross the 2 lane street and enter the Ann & Alfred Goldstein Marine Mammal Research & Rehabilitation Center. Here is where the dolphin research tanks are located. Dolphins that are recued in the wild are rehabilitated and then returned to their natural habitat. It is also used as a training facility for future Marine Biologist (pictured right). You can proceed downstairs to the turtle exhibit. The research and rehabilitation center also cares for injured and/or sick turtles. There were Loggerhead Turtles in the tanks the day we visited the Center. Turtles are living descendants from their prehistoric ancestors. Larger sea turtles and tortoises can live to be over a 100 years old. Some species of Loggerhead turtles can measure up to 110 inches in length and can weight around 1,000 pounds. These endangered species don’t produce eggs until they reach their sexual maturity. A Loggerhead’s birthing-age maturity starts as early as 17 or as late as 33 years of age. There are two tanks that house these aquatic reptiles and are staffed with Aquarium members along side them who can answer most of your questions. It is quite the experience to see these turtles up close.

Just a short walk from the Turtle exhibit is the Manatee tank. Buffet. They are off-springs from Romeo and Lorelei. Hugh is a male manatee weighing in at approximately 1300 lbs. Buffet is his older sibling (male) and weighs over 1775 lbs. Hugh and Buffett are very curious mammals. They are as interested in you as you are with them. This marks the end of the initial tour.

There is a separate bird sanctuary straight across from the Mote’s main building. It has its own entry fee and is not associated with The Mote Marine Laboratory and Aquarium.

The tour is not only fun, but very educational. It is a great day trip or could be part of a longer stay in the area. You can read more about the attractions at the Mote by going to www.mote.org. A special thanks to our good friends Ron & Deb for accompanying us on this great adventure!