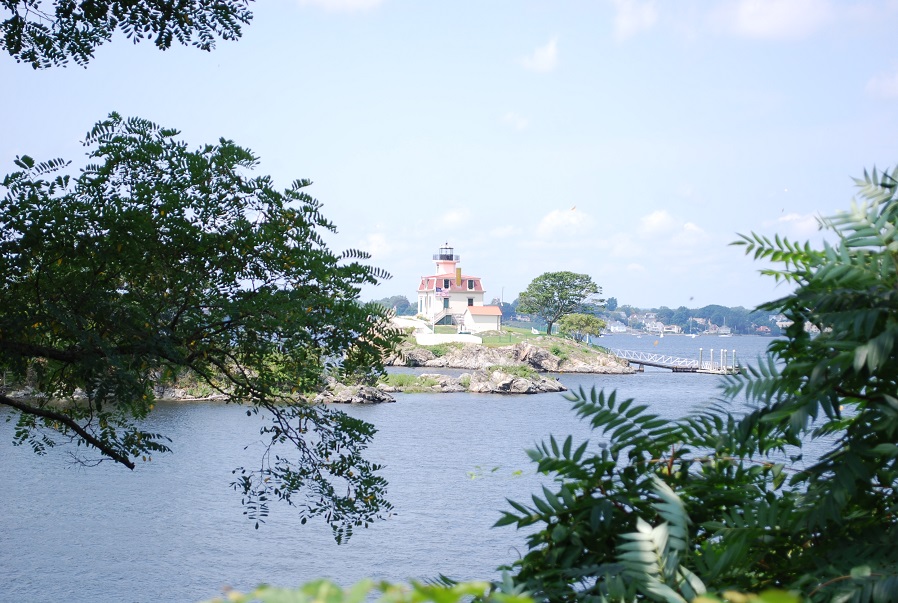 Rhode Island is one of America’s smallest states but at the same time, has approximately 400 miles of shoreline. Being one of the original 13 colonies, Rhode Island was and still is a popular port of call. With ships coming and going, they still need guided through several treacherous channels. Join us on our remarkable Rhode Island Lighthouse Tour.

My name is Anthony. I will be your guide for this amazing tour. We are going to visit six lighthouses that are situated along Rhode Island’s navigable waterways. This fabulous road trip will be broken up into two separate segments. Part one of our adventure starts in the historic town of Bristol. From there we will slide across the Narragansett Bay and finish up in Newport Harbor with its luxurious yachts.  Let’s get started! 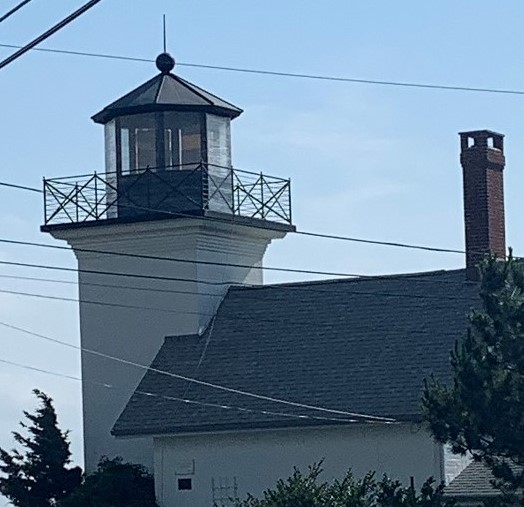 The Bristol Ferry Lighthouse is located along one of the Narragansett Bay channels. It sits on the northern point of Bristol where the Mount Hope Bridge connects to Aquidneck Island. The lighthouse is approximately 20 feet high and has a keepers house. 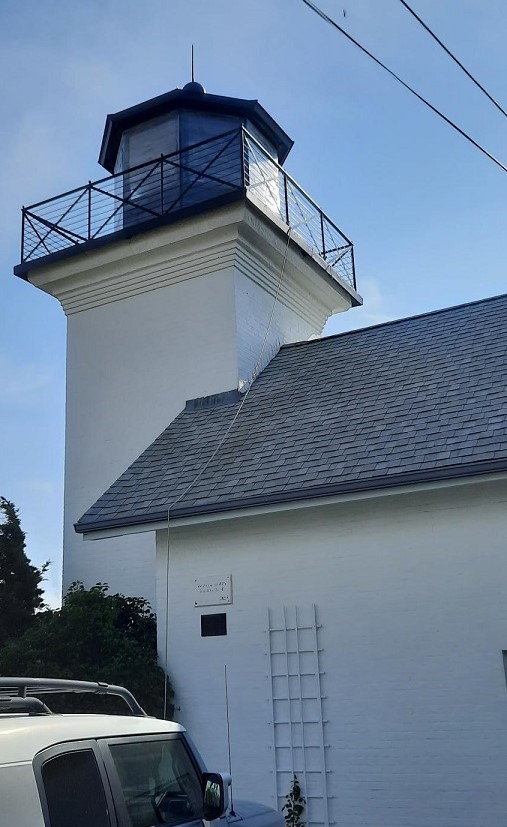 This brick tower and wooden cottage was built in 1855. It’s main purpose was to guide the ferry with it’s cargo of supplies and passengers back and forth from mainland to the island.

We took a few minutes to stand at the base of the bridge and looked across at the other side. It doesn’t seem to be that difficult of a trip. However, in the dead of night with a strong current or storm, things can get quite treacherous very quickly without a guiding light. 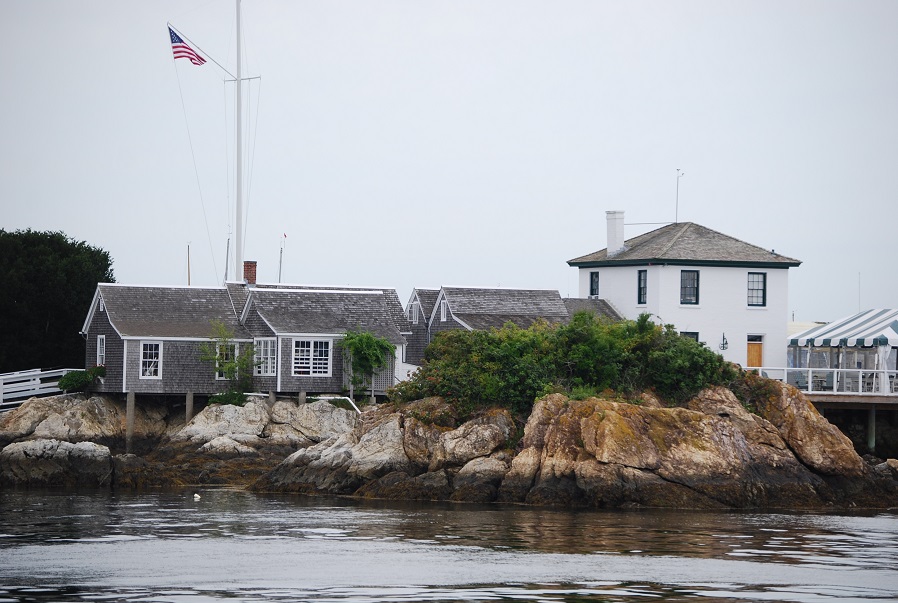 The weather was overcast, but kept the temperature at a tolerable level. Our next stop is Newport. There are several lighthouses on this well-know island.

The Ida Lewis Lighthouse was constructed on Lime Rock in 1853. This historic lighthouse was equipped with a Fresnel Lens. This beacon of light helped vessels find their way into the Newport Harbor. The first keeper had to row their dingy to the lighthouse under various weather conditions. 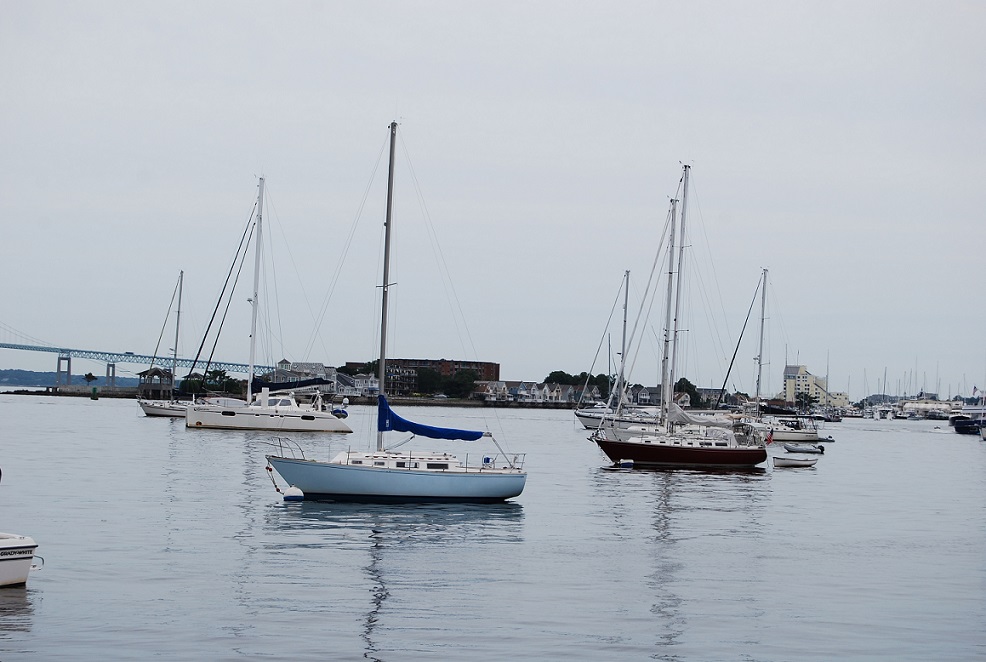 To eliminate this treacherous trip out to Lime Rock Island, a small cottage was built in 1857. The Lewis family eventually moved in as keepers. Ida Lewis assumed the chores in 1879 till 1911. The lighthouse was dedicated and given her namesake in 1924.

Evard Jansen became the new keeper and after retiring in 1927, the lighthouse was deactivated in 1963. Today it is the clubhouse for The Ida Lewis Yacht Club and is consider an historic landmark.

The ambiance of the morning’s climate still held its presence as we took a last look at the Ida Lewis Lighthouse. We carefully mapped out our next destination and before you knew it, we were on our way! 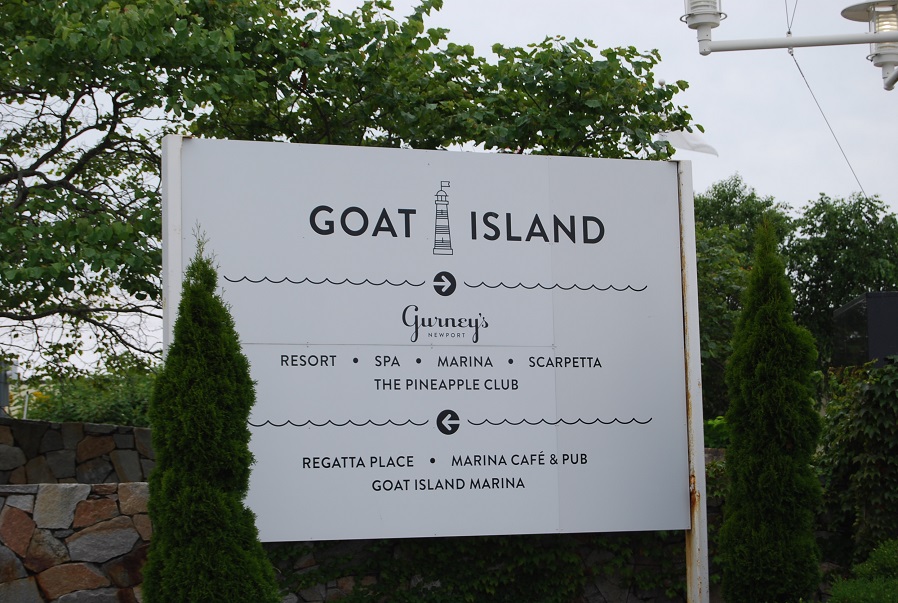 The Newport Harbor Light, a.k.a. Goat Island Light is just minutes away from the Ida Lewis Lighthouse. This very important lighthouse is located in the Narragansett Bay and on the north end of Goat Island.

This smaller but necessary beacon of light was built in 1842. It faces the Claiborne Bell Bridge, which is more commonly known as the Newport Bridge. Its “Green Light” has guided many wayward vessels safely into port. 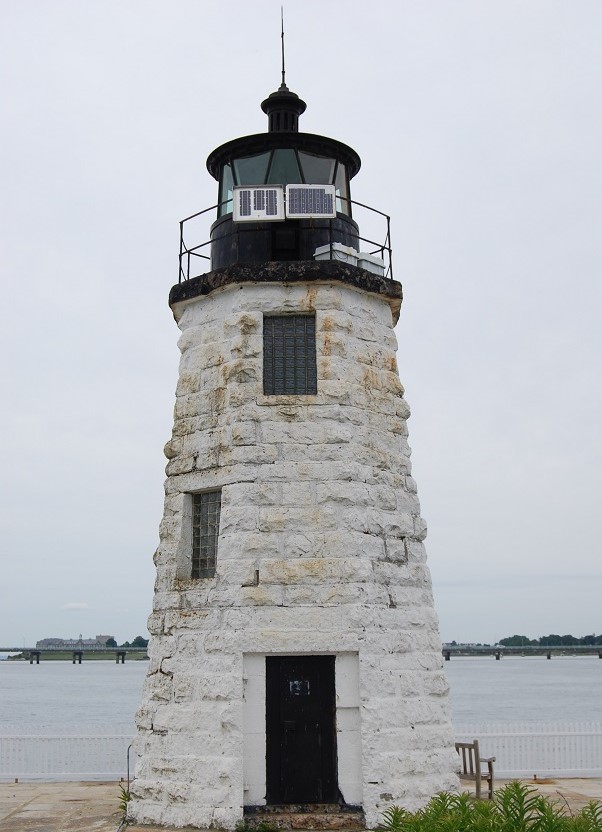 We crossed the 2-lane bridge and parked. We could see the lighthouse from the road, but it appeared to be behind the Resort. We made our way along the property’s fence line and through the receiving docks. We finally managed to reach the 35 foot high structure.

The first lighthouse was built in 1824. In 1851 it was transported to Prudence Island where it still remains today. The current tower is located off Goat Island’s point and was connected by a dike. However, in the 1960’s the land around it was filled in.

In 1864 a keeper’s house was built. Everything was good until 1961. A submarine had misjudged the breakwater and slammed into the foundation of the house. Needless to say an electric light was placed in the tower the following year. The keeper’s house was eventually torn down.

If you notice, the lighthouse has solar panels. There is also what looks to be 2-battery boxes located at the base of the lantern room. It seems that nothing can escape modern technology. A developer bought the small island. However, the lighthouse is still managed by the American Lighthouse Foundation.

Before we finish up the first of a two part series, I want to share some fabulous photos along with some personal dialog. One of the Narragansett Bay’s most prestigious harbors is located in Newport, Rhode Island. It is a floating parking lot filled with some of the most magnificent sailing vessels on the northeastern shores. I don’t have any real information regarding these yachts, but I think I can ab-lib a little!

Can you imaging parking a 150 to 300 plus foot yacht? You just don’t pull up to a tender and yell out, “Hey buddy! Where do you want me to put her?”

After docking, most of them have their own boats that transport the owner and their guest to their favorite waterside eatery. 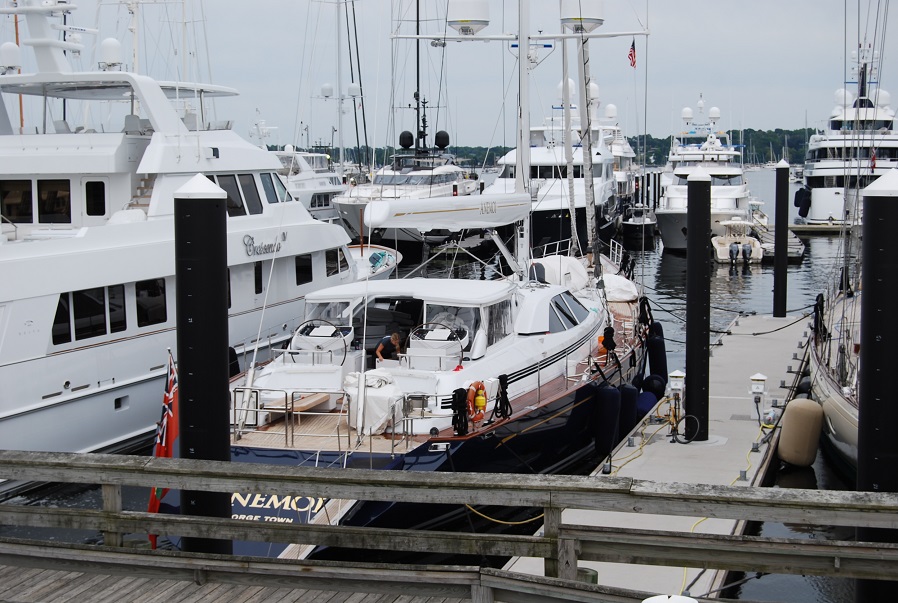 Here is one of the smaller sailboats we saw in the harbor but again, what do you consider “smaller?” This would do me just fine as long as I have a captain and crew to man it. It could be my vacation home! “Who am I kidding”. I couldn’t even afford the taxes and insurance. 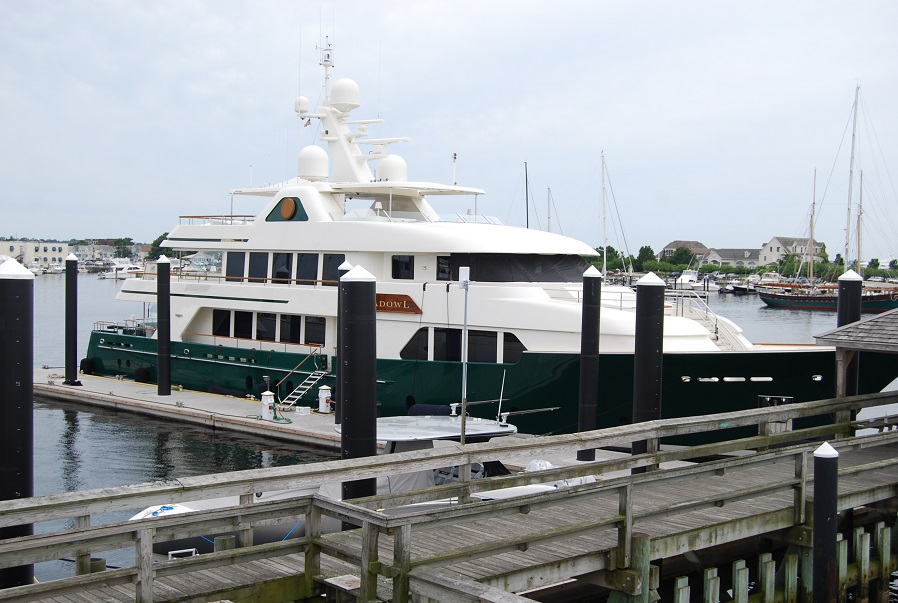 Here’s one awesome motor yacht. I wonder how many staterooms this floating palace has? I bet it has a heck of a party deck. Just imagine cruising the ocean blue enjoying the views and sea breeze while sipping on a beverage. Life would be grand!

I hope you enjoyed the first segment of our lighthouse tour. We have included a brief video that gives you a quick glimpse at the three lighthouses we visited. The second part will feature the remaining lighthouses that safeguard Rhode Island’s various waterways. Stay tune! 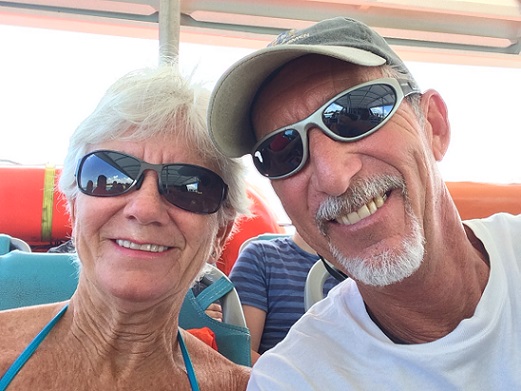