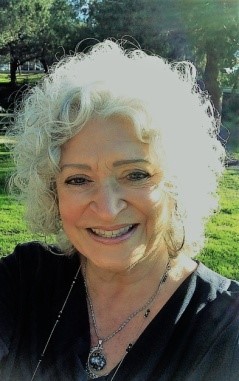 Some of you may know me through my previous articles that I have written for “You Me and the Dock”. I am Gay Isis – a.k.a. Silver Locks. I adopted the surname which identifies me with the fact that in recent years, I have decided to stop coloring my hair. I wanted to become the all natural ‘silver haired’ person I am.

Colorful Autumn: Up to 15% Off 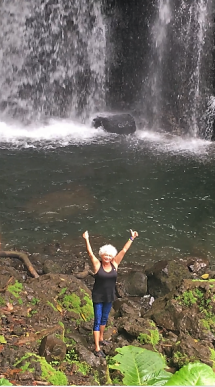 I prefer the word ‘silver’ but hey, I’m gray and that is the color that the world identifies women who go all natural. I first came to the decision to go gray while traveling. Go figure that one out! My husband and I were finishing up a road trip and towards the end, I was obsessing over my “skunk-stripe”. This occurs when your silvery gray roots gradually begin to show. You develop a stripe on the crown of your head. It keeps progressing downward like a silvery waterfall as your hair grows out. 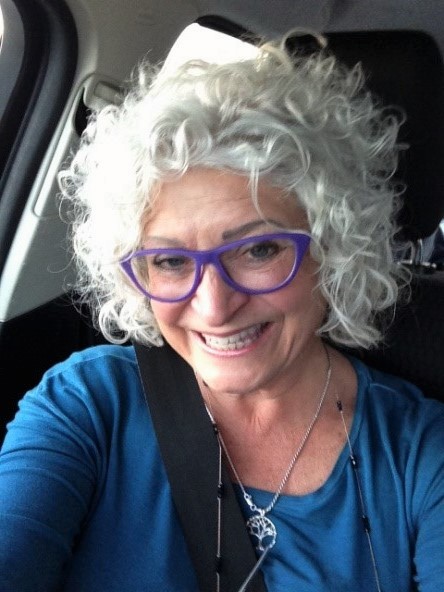 My appointment to get my hair colored was the day after we got back home. My husband encouraged me to watch a ‘YouTube’ video while driving. It referenced women who had taken the plunge to go all natural. It seemed like a good ideal and what do I have to lose!

I was convinced that this is what I really wanted to do. No more being held captive or obsessing over my hair color. Add this with saving a substantial amount of money, not having to schedule things around my hair appointments, stop putting toxic chemicals on my hair and scalp, and begin to embrace the authentic me.

It wasn’t all that easy and especially when the skunk stripe started to look more like a zebra stripe! People looked at me like I was lazy or why haven’t I colored my hair? For support I turned to Facebook and found a group called “Going Gray Gracefully”. They embodied the natural transition to turning gray. They advocate no help during the transition. I quickly joined and it became such a wonderful support system. 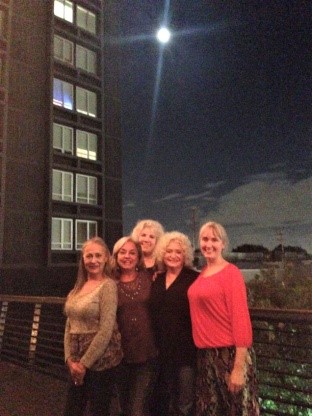 I met so many wonderful women going through the same issues. One of these beautiful women was Victoria Marie who is a very dynamic actress. She has a YouTube channel that addresses the lack of available film parts for women of gray hair. It also talks about how frustrating it is being in LA and struggling to find acting opportunities. This generated the idea of making her own documentary highlighting these issues with her videographer – Dave Nelson.

As luck would have it, she started calling for women who would be interested in interviewing for the film. We were asked to write a short statement on why we chose to transition from coloring our hair to going natural. Victoria accepted my story along with other ‘silver sisters’. Just like that I was on my way to LA to film a trailer for Victoria’s movie. Hence, the documentary called, “Gray is the New Blonde” was born.

I had no idea what to expect and knew no one who was going to be there. Victoria arranged lodging close-by where all of us could stay. She also coordinated people who would taxi us to and from the filming destination. I think it’s important to note that Victoria has funded this film all on her own. We as participating actors paid all of our own expenses to be part of this exciting and unique opportunity. 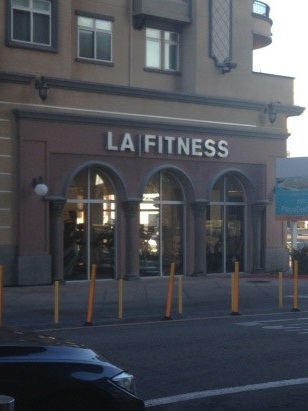 Through text messaging, I was in contact with the other women who would be part of the filming. We all decided to meet in the lobby that evening. It wasn’t hard to tell who might be with me in the film since we were all gray! We went up to the rooftop of the hotel – above an LA Fitness Center for dinner and drinks. We all miraculously became friends! I recall that our waiter loved us and was excited for what we were about to do. 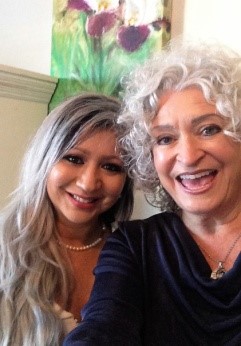 The next morning was an early one. We were asked to put on our ‘best face”. This meant applying ultra amounts of makeup, styling our hair, and dressing up with a distinctive attitude. We were chauffeured to a home which would be our ‘studio” for the day. Look out Hollywood, here comes the “Gray is the New Blonde!”

The most anxious part was waiting for your turn to be interviewed. We were all a little nervous to be in front of a camera. However, Victoria made all of us feel comfortable and knew it would help eliminate multiple retakes. It finally became my turn to be interviewed. I was nervous when I sat down but as time went on, I felt more at ease. There was no guarantee that any of our interviews would be used. But as luck has it, I recently learned that my interview did not end up on the cutting room floor! It’s going to be my few minutes of fame. 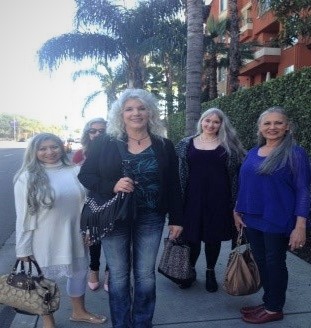 After my group – 6 ladies in all were interviewed, we had some time to spare. So we decided to walk down to The Grove for lunch. The Grove is an upscale-outdoor shopping mall that is located in Los Angeles’s historic Farmers Market district. It is part of Hollywood’s trolley tour schedule. The brief walk helped all of us release some tension from the interview. 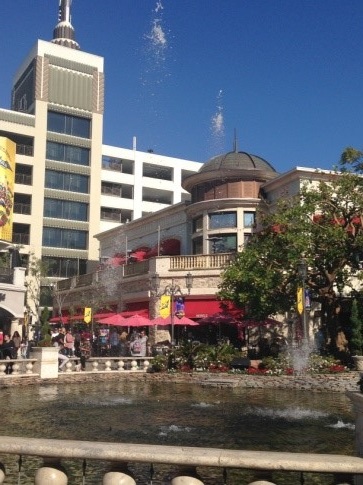 The Grove was Created by Rick Caruso who is a mega developer in LA. It is often described as having a Hollywood set facade. This is not surprising since Rick hobnobbed with many of Hollywood’s famous directors. He created a cobblestone Main Street (when no city existed) surrounded by a dancing fountain, upscale retail stores, Art Deco styled movie theater, and a variety of restaurants. I can’t recall the name of the eatery where we ate lunch, but never the less had a fabulous view of the fountain and the street below.

We decided to walk off our lunch, so we strolled down to a beautiful park that was close by. We took a minute to take in the sun and this solemn moment. We had plenty of casual conversations learning about each other. In the end, we were all excited that we had the opportunity to share in this unique experience. A memory that will last a lifetime. 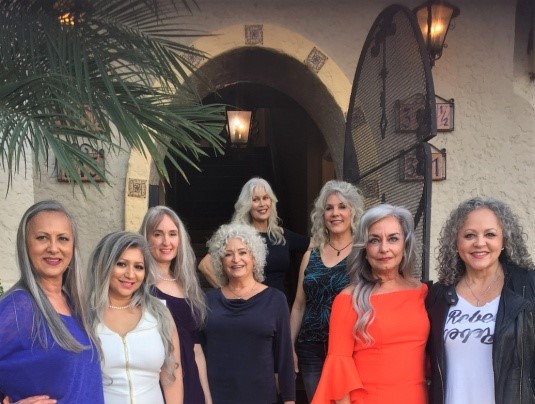 We returned to the studio to get some still shots done and at the same time, got to meet the other women that were a part of the interviewing process. That evening we all had dinner at a local family owned Italian restaurant. I found out that one of the women who happens to be the brand ambassador for Gray is the New Blonde, lives in my home town of Dayton Ohio.

This was a very unique experience and one that I will never forget. I was honored to be a part of this wonderful documentary. Women of all sorts are becoming more empowered to embrace their aging gracefully. Going naturally gray is one of those empowering traits.

As the date for the premier gets closer, “Gray is the New Blonde” has already received several awards for the trailer (below) promoting the film itself. Victoria Marie who is the producer along with David Nelson, the videographer, both deserve all the kudos for making her dream a reality. 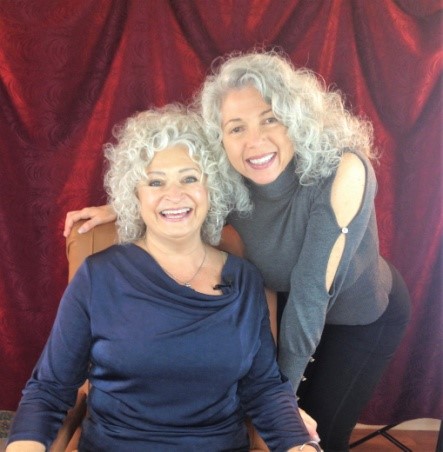