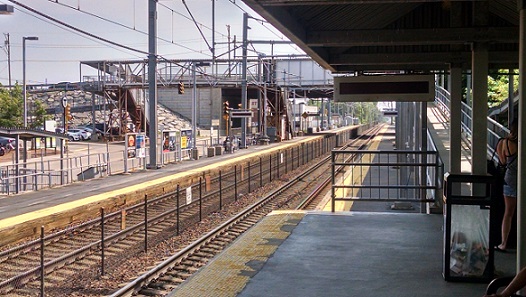 Here is where it all starts. We bought our tickets and waited at the Allterboro, MA train station (pictured left). We will be taking the train that is heading for downtown Boston. This will be another new experience for me and can’t wait for it to start. Once the train arrived and we boarded, the adventure was about to begin. The ride into Boston was very smooth and rather relaxing. The regular or 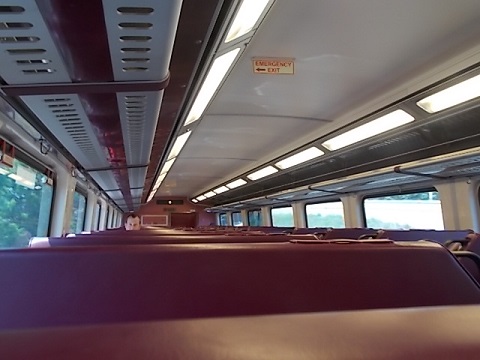 experienced commuters sat in the seats and stared down at their cell phones, laptops or took a short nap. I on the other hand, watched out the window as the unfamiliar sites quickly passed by.


The passenger cars are pretty basic, but offer enough comfort to make the ride an enjoyable one. The trip took approximately fifty minutes. 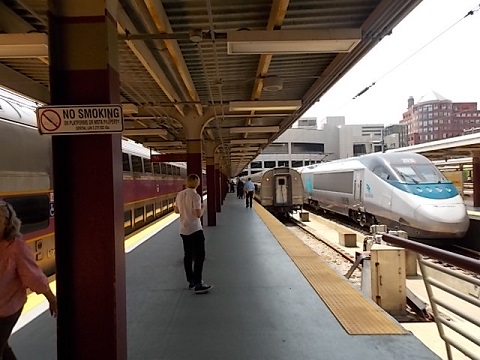 We arrived at the main terminal and stepped out onto the elevated platform that led us to a very busy terminal filled with commuters. We followed along with the rushing group 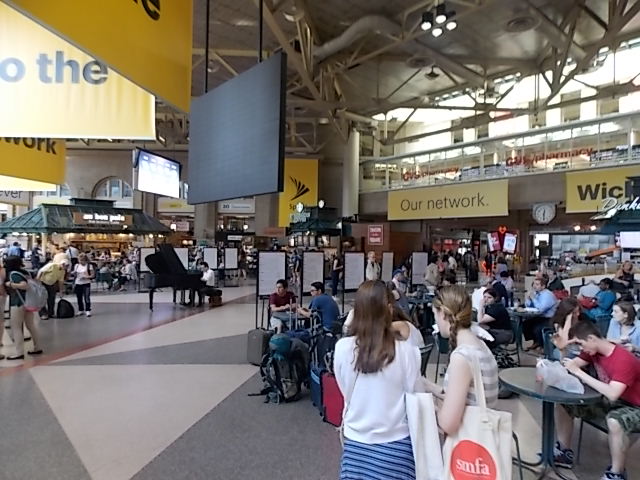 trying to make their scheduled appointments. We managed to make a restroom stop and then gather our thoughts and day’s itinerary – at least finding a starting point. We made our way out of the train station and found ourselves standing on the corner of High and Broad streets. We finely made it. 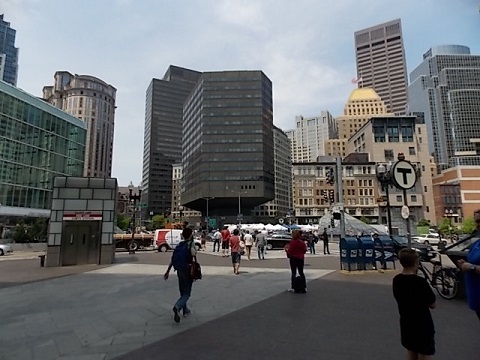 The first thing I set my eyes on was the hustle and bustle of downtown life. The Skyscrapers, people rushing by with agendas on their minds and the sounds of car horns honking every other second. My level of excitement quadrupled. My blood started rushing through my body at lightening speed. After settling down my emotions, my first stop is to visit the Boston Harbor and see where the Boston Tea Party incident took place.

It just so happened that the Harbor 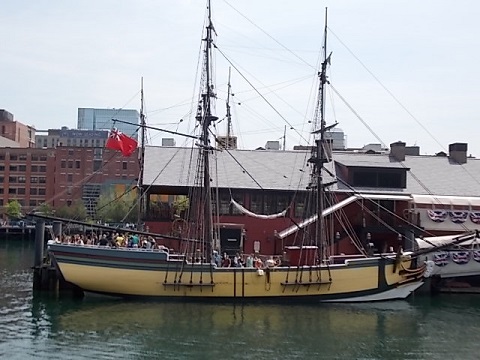 Boardwalk was two blocks down and one block over. After entering the harbor, the attraction was straight across from where we were standing. I watched as participants throw over makeshift bags of tea mimicking the famous event (pictured left). From there we ventured north along the walk until we got to Long Wharf (pictured lower – right). This historic wharf at one time extended almost a half mile into the harbor. Here is where ferries and tour boats carry passengers in and around Boston’s waterways. This is also where the New England Aquarium and the prestigious Boston Wharf Marriot call home. 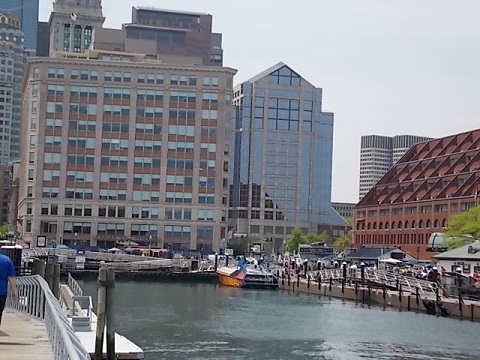 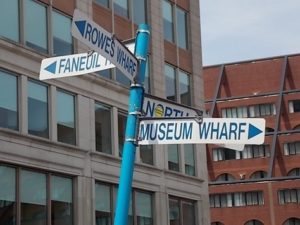 Boston has multiple wharfs in the area. The street sign directed us towards some of their locations and attractions. A few of the boats like the one shown above can be a little wild. The Codzilla is a speedboat that zips people around Boston’s waters a bit faster than the normal tour boats. Boston has some very extraordinary places that serve and sell 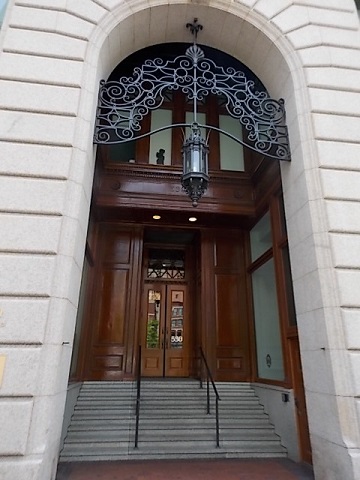 fresh seafood, and Legal Sea Foods is one of them.

New England and its colonial style influence is evident everywhere you look. From the magnificent woodwork and wrought iron craftsmanship pictured left, to the lamp poles (shown below) that 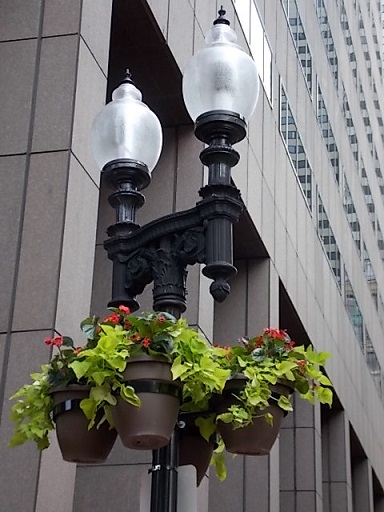 cradle the seasons flora. Boston is very unique in that it seamlessly blends the older landscape with the newer. Not many metropolitan cities of this size can pull that off. Lunch time was approaching quickly. I found out that there is a downtown market area close by. We decided to investigate our eating options in and around the area. 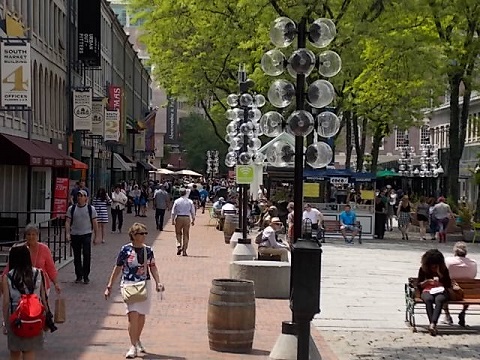 Between North and South Market streets is Quincy Market. It is filled with lots of indoor and outdoor – when weather permits shops and eateries. The tree lined and pedestrian friendly thoroughfare was busy with local residents and business 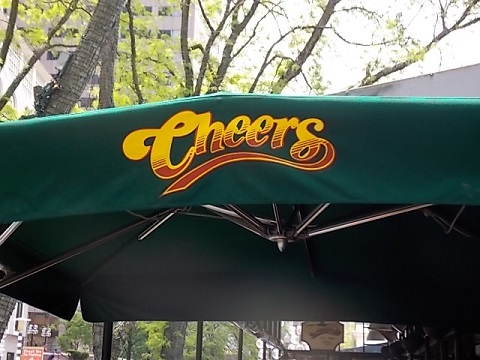 people looking for a place to have lunch, along with tourist from every part of the world. Unless you were living in a cave during 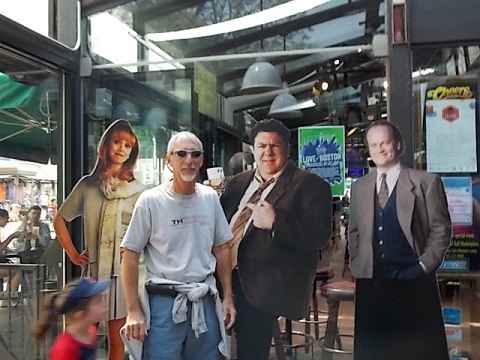 the early 80’s and 90’s, the popular TV sitcom Cheers was named after a local pub that resides in downtown Boston. Here is where I decided to stop and have an appetizer and beverage. 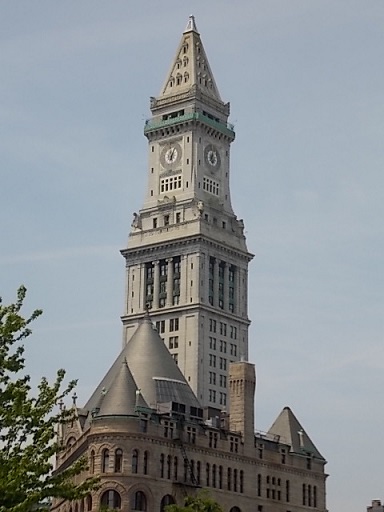 After lunch, we still had plenty to see. Boston’s bold skyline has so much diversity. Just under 500 feet tall and looking over Boston’s Financial District is the Custom House Tower. This iconic structure with its elevated clock is a beautiful sight for the noble city. Construction started in the mid 19th 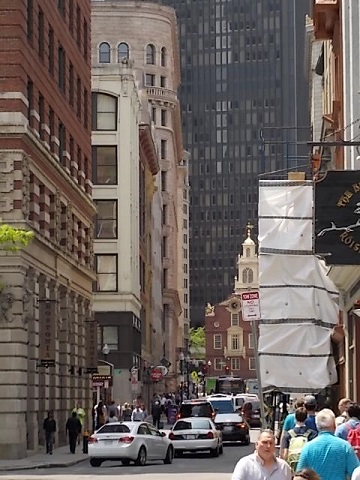 century and was completed in 1910. Currently the Marriot Vacation Club Pulse Hotel occupies this historic landmark.

The city of Boston played a large role in our country’s history. The streets are lined with buildings that housed many of our early influential leader’s homes and gathering places. As I walk through the nostalgic streets, I get a sense of how it could have been in the 17 and 1800’s. If we could only turn back the hands of time.

Like many of my traveling adventures, there is way to much for me to write and illustrate in just one article. I will stop here for now and resume at a later date. There is so much more to see and tell about this fabulous city. See you soon! 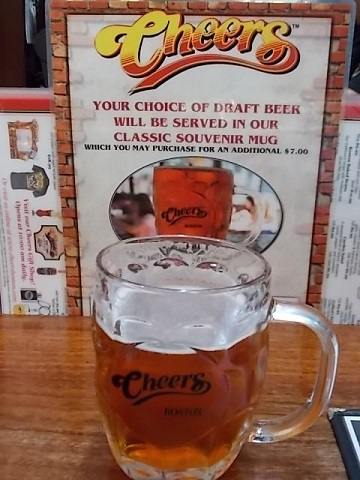