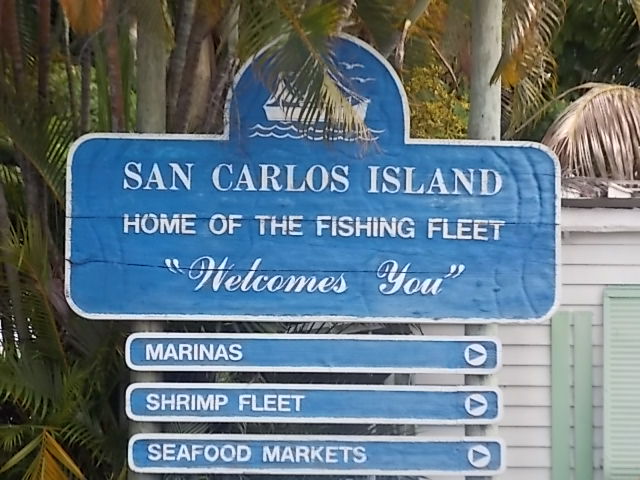 Fort Myers Beach (FMB)officially incorporated in December 1995. This SW Florida island is a popular destination for snowbirds and vacationers alike. The town of FMB resides on Estero Island. It is seven miles long and is approximately a quarter mile-wide. It has an estimated  6,300 year-round residents. Estero Bay, which is the body of water that separates the island from the mainland, is a rich food producing estuary  that is filled with lots of ecological wonders. Estero and its adjoining Black Island was a haven for pirates in the 1870’s. One pirate in particular named Black Augustus, which Black island is named after, made it his final home. Rumors have circulated saying that Black Island still has buried treasures on it. The island of San Carlos, which is part of FMB is  connected to Estero Island by a large pillared light blue structure named Matanzas Pass Bridge. San Carlos Island harbors a large fleet of shrimping  boats. The “pink gold” these vessels fish from the gulf waters are celebrated with an annual festival. The Shrimp  Festival takes place on FMB in the month of March. The two day event  provides specially prepared name-sake dishes, along with a parade and the selecting of a queen and her court. The celebration is FMB’s largest two day annual event. The inland city of Fort Myers was the winter home for Thomas Edison and his family. He often entertained many famous people at his estate. One such family was Henry Ford’s. It has also been rumored that Edison entertained many dignitaries on Estero Island who wanted a reprieve  from their public fame. In those days you could only reach the tropical island by boat. FMB is still a desirable destination for lots of people looking to shake the winter blues. Over 1.8 million people visit the island each year. They enjoy the beaches, shopping, restaurants and the outdoor activities. The island carries a distinctive ambience of being non-commercial. Most of its shops and eateries are located on the north end of the island and are home grown establishments. Estero Island is well known for its sugar-white fine sandy beaches, Caribbean fed Gulf waters and sunny weather. The tropical climate of SW Florida attracts a lot of winter time residences to its warmer temperatures caused by the Gulf Stream. Downtown FMB has its own version of Time Square. There is always some type of entertainment happening during the day, night or a combination of both. The center of the pedestrian only square offers easy access to the FMB pier and public beaches. The eateries and shops continue from Time Square  down Old San Carlos Blvd to the back bay. You can watch the Captains maneuver their vessels through Matanzas Pass and out to open waters from a small gazebo perched right on the waterway. The back bay also has a variety of  restaurants that offer great views while enjoying your favorite cuisine and beverage. Find a place to park your car and walk around the nautical town. There are plenty of places to stop in and listen to some of the local musicians play anything from rock to country. The south end of the island offers a little less in the way of shopping and side-by-side eateries and bars. It is home to most of the island’s high rises and housing communities. There is an executive nine hole golf course, a few marinas and smaller plazas that are a little more low-key than its downtown rival. It also provides direct access to a nationally recognized state park called Lovers Key State Park.

The Big Carlos Pass bridge (pictured below) takes you to Black Island and Lovers Key State Park. For many years Lovers Key was only accessible by waterway and was a place where adoring lovers went to enjoy seclusion and its romantic setting. There are four barrier reefs that make up the park’s small islands.  They all have an abundance of wildlife which includes aquatic mammals, birds and ground roving animals. The park has been featured on the Travel Channel and other televised documentaries. The sanctuary is a protected habitat for all  the plants, animals and ecological elements within its confines. Lover Key State Park offers kayaking, bike trails, guided and self-guide tours. The park does have a minimal entry fee. You, Me and The Dock will be doing a feature article on Lovers Key State Park in the near future. Nothing like a little piece of heaven here on earth.