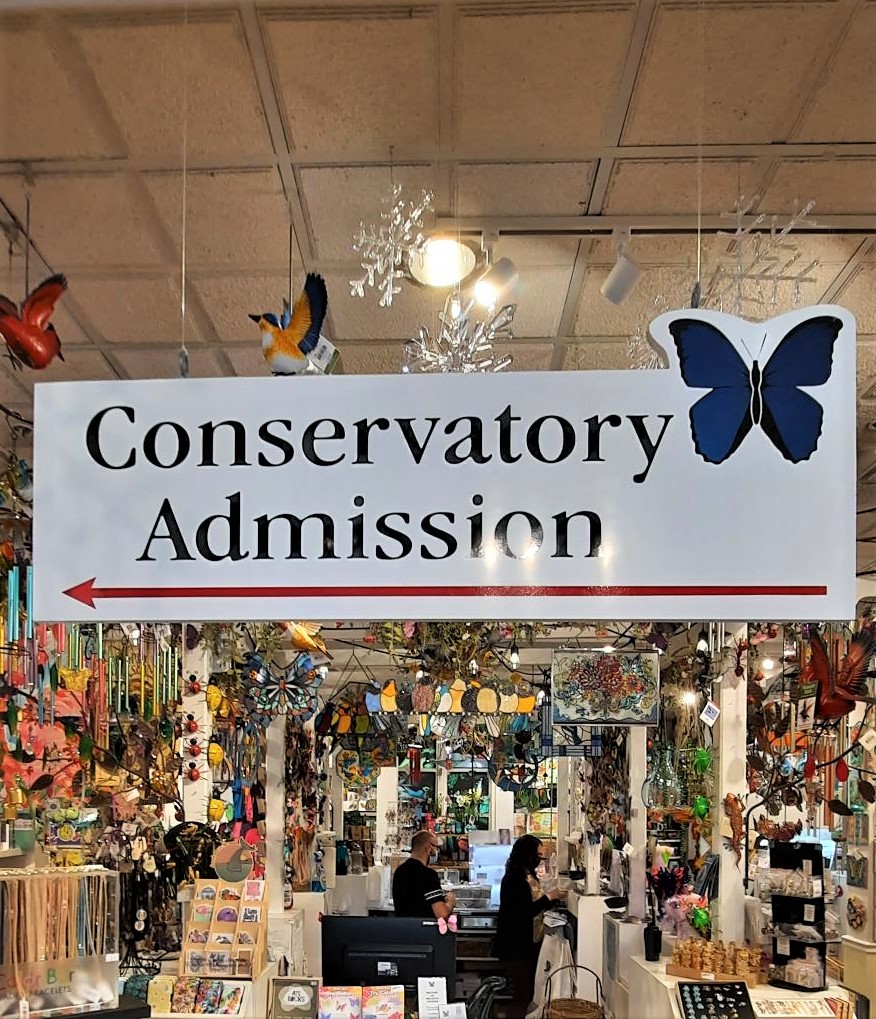 Florida’s Key West is a destination that could possibly have something for everyone. My name is Anthony. Many of you might know me from my past adventures. On a recent trip to Key West via the ferry, we took a few days to explore several family friendly attractions.

Most people seem to associate Key West with bar hopping, Fantasy Fest, Mallory Square and fabulous sunsets. Not that these events aren’t fun, but there are other attractions that can be enjoyed as well. 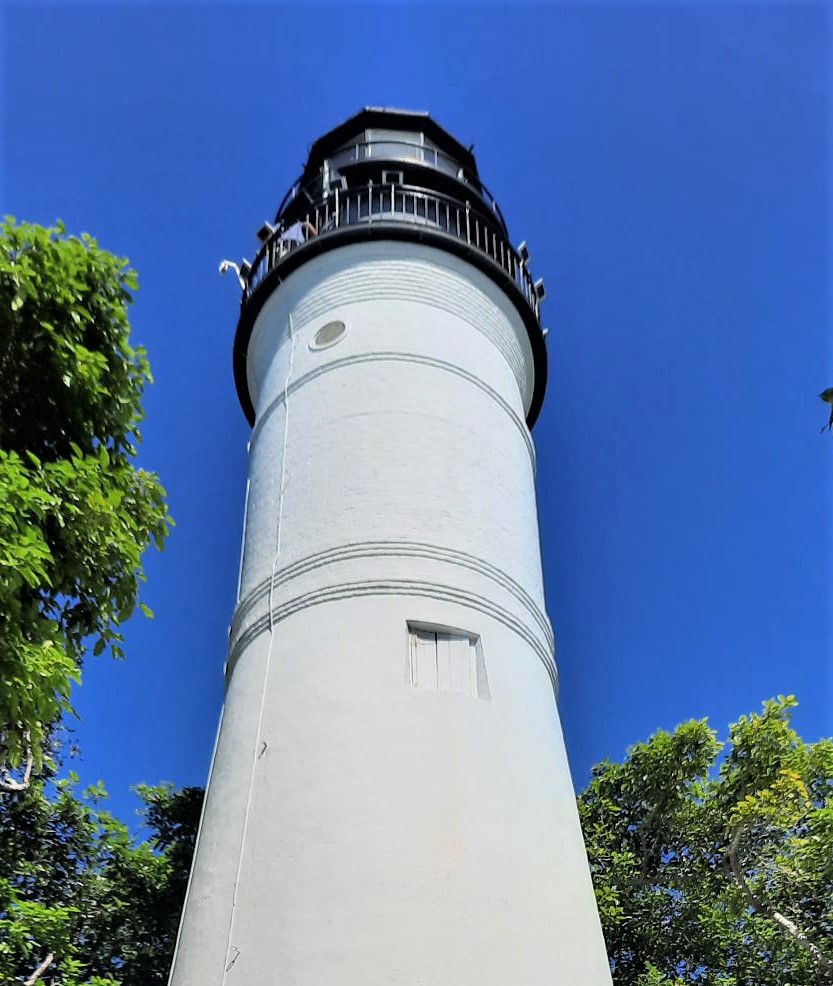 Before I start with The Key West Butterfly & Nature Conservatory, I would like to talk about the Key West Lighthouse. Its a short walk from the Hemmingway House & Museum, and the Southernmost Point attractions.

The original tower was built in 1825. A severe hurricane in 1846 destroyed the lighthouse. In 1848 it was reconstructed more inland. It’s optics were also replaced with 13 lamps that fit into 21 inch reflectors. Other upgrades have been done throughout the years as well.

The first lighthouse keeper died in 1832. His wife took over the task of maintaining the beacon of light for 32 years. This was quite an accomplishment. It was eventually automated in 1915. 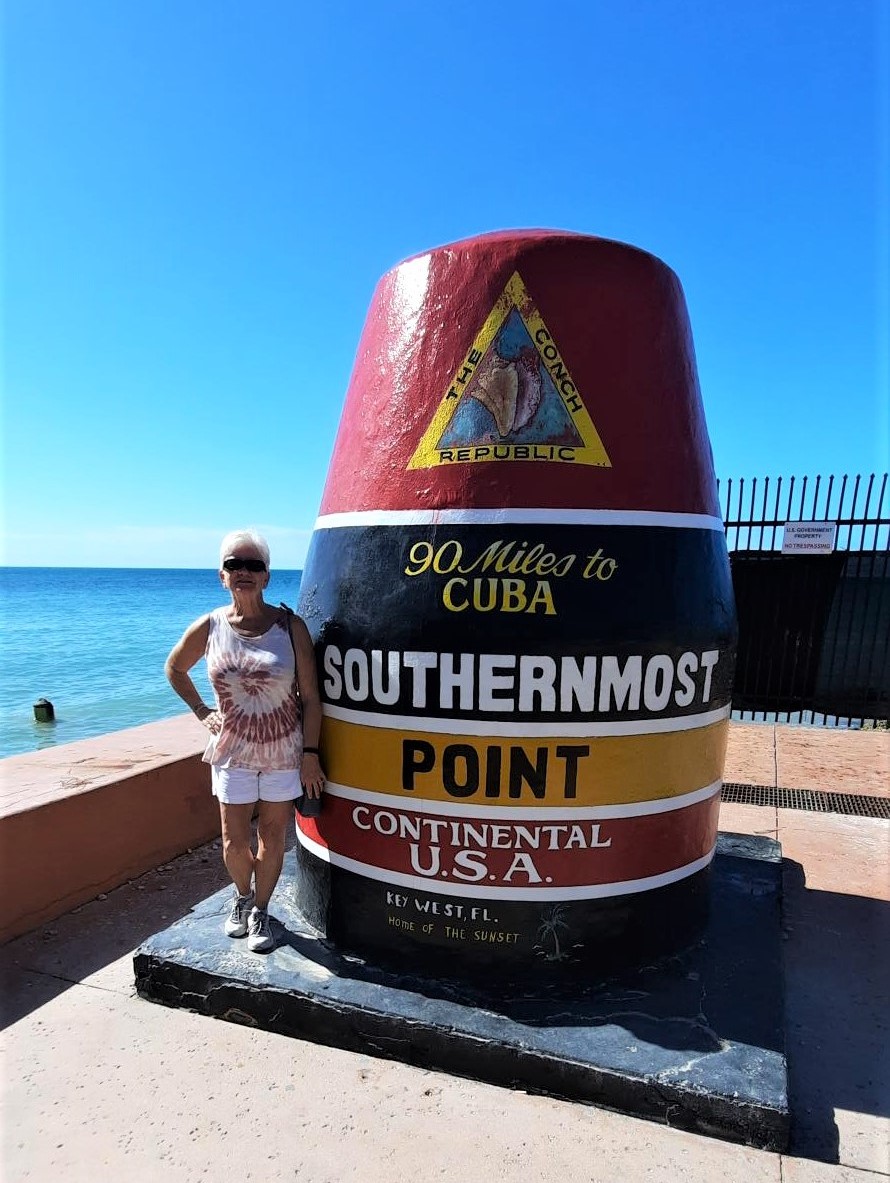 Another attraction is The Southernmost Point. People wait in long lines for extended periods of time to get their picture taken. It’s been said that the iconic monument is one of the most photographed in America!

This famous buoy was establish in 1983. After Hurricane Irma swept through, it was repainted by it’s original artist. The “90 Miles to Cuba” was added at that time. Next to the buoy is a telegraph hut. In 1921, an underwater cable was laid that connected America to Cuba.

Now that we have touched on a few of Key West’s popular sites, let’s move on to the main topic. The Key West Butterfly & Nature Conservatory is just around the corner from the Southernmost Point. Without further ado, lets get started!” 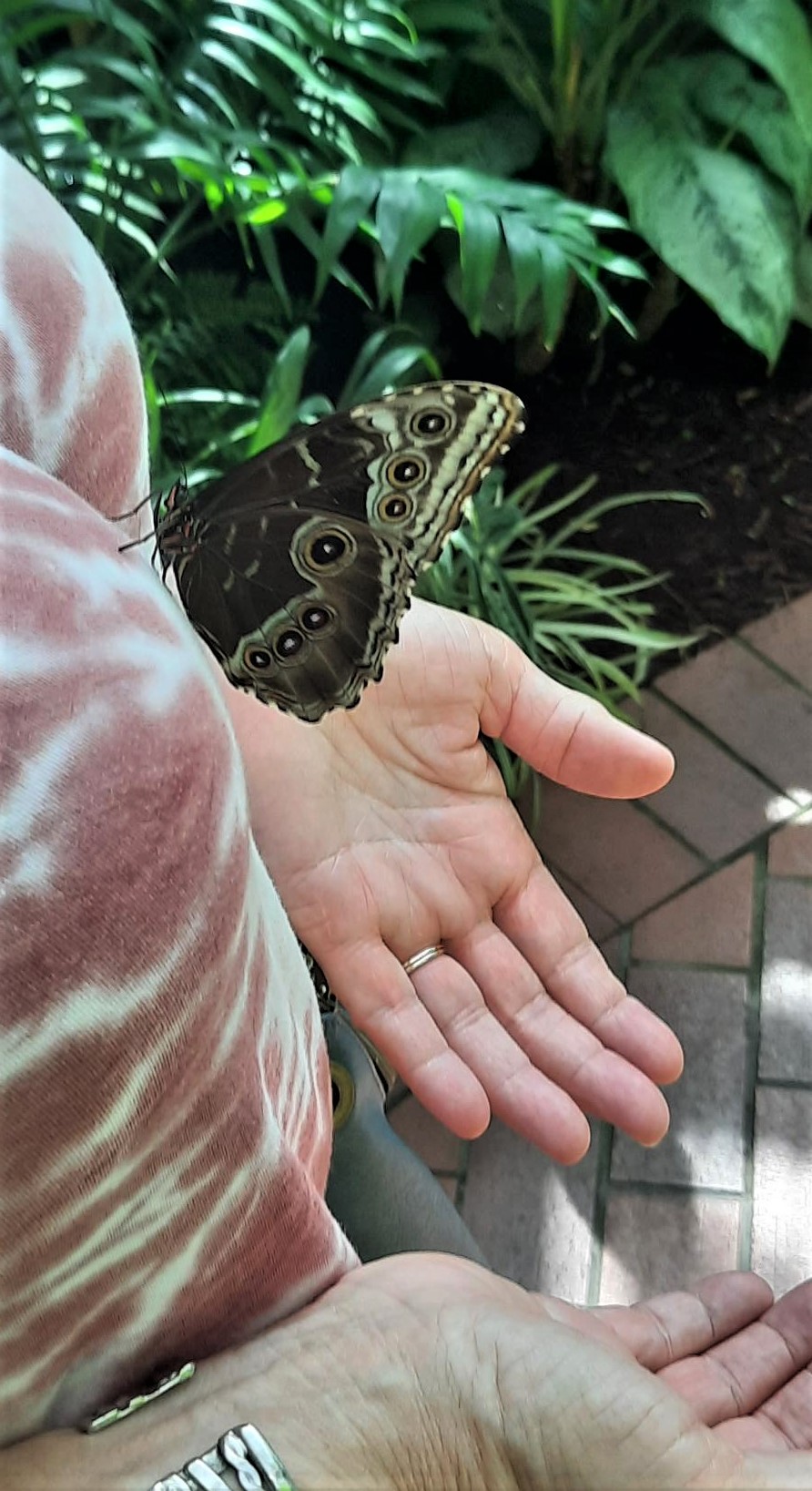 There is so much to take in. The photos we took will be complemented in the brief video provided at the end of this blog-article. It features several up close shoots of our tour through this wonderful adventure. Don’t pass this fabulous presentation up. 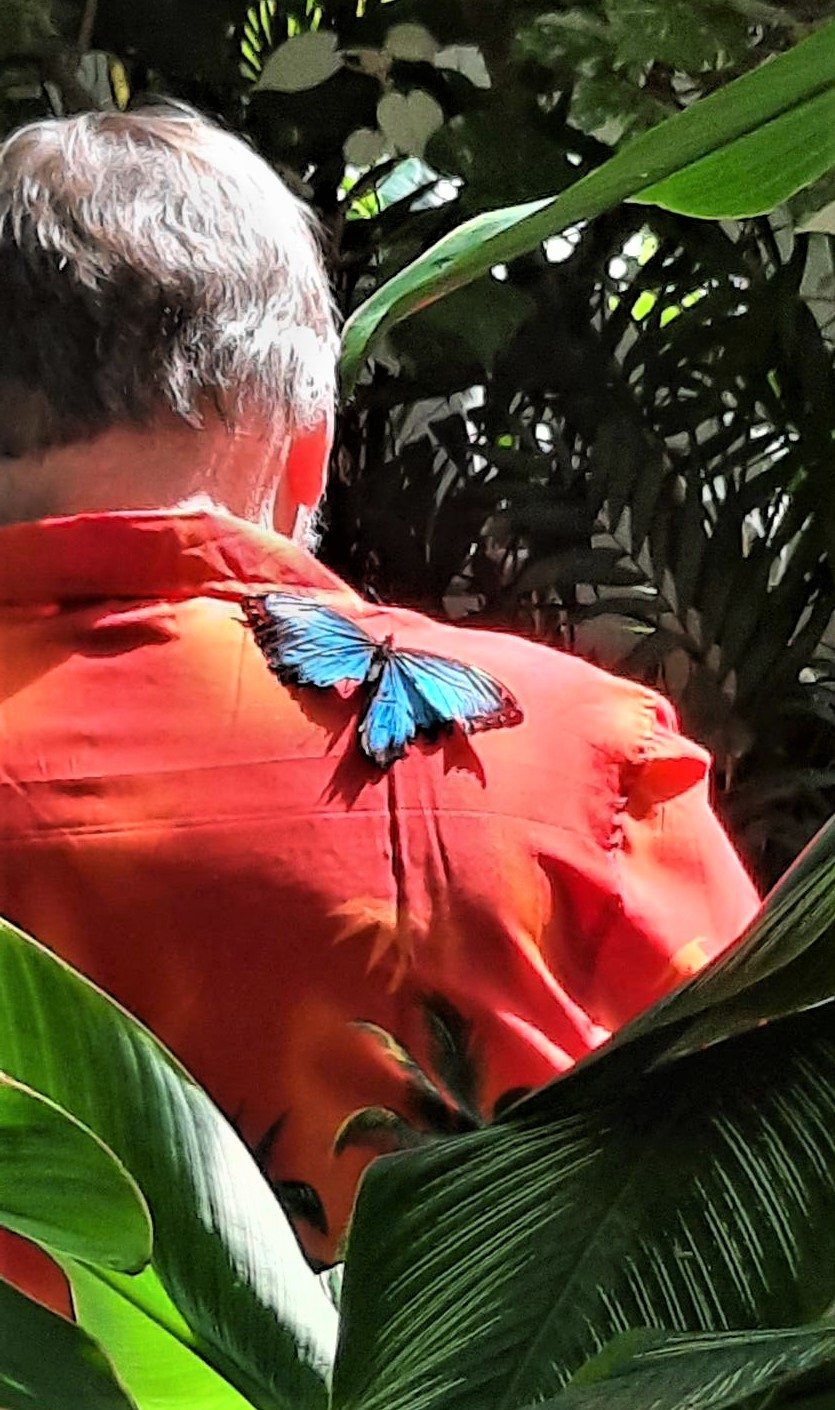 The moment we walk into the 5,000 square foot – climate controlled plexiglass atrium, hundreds of colorful butterflies swarm all around us. There are 60 or more different species of butterflies from all around the world.

Both the multicolored butterflies and 20 plus exotic birds call this indoor paradise home. These amazing creatures perched from their branches rush to greet the curious visitors. 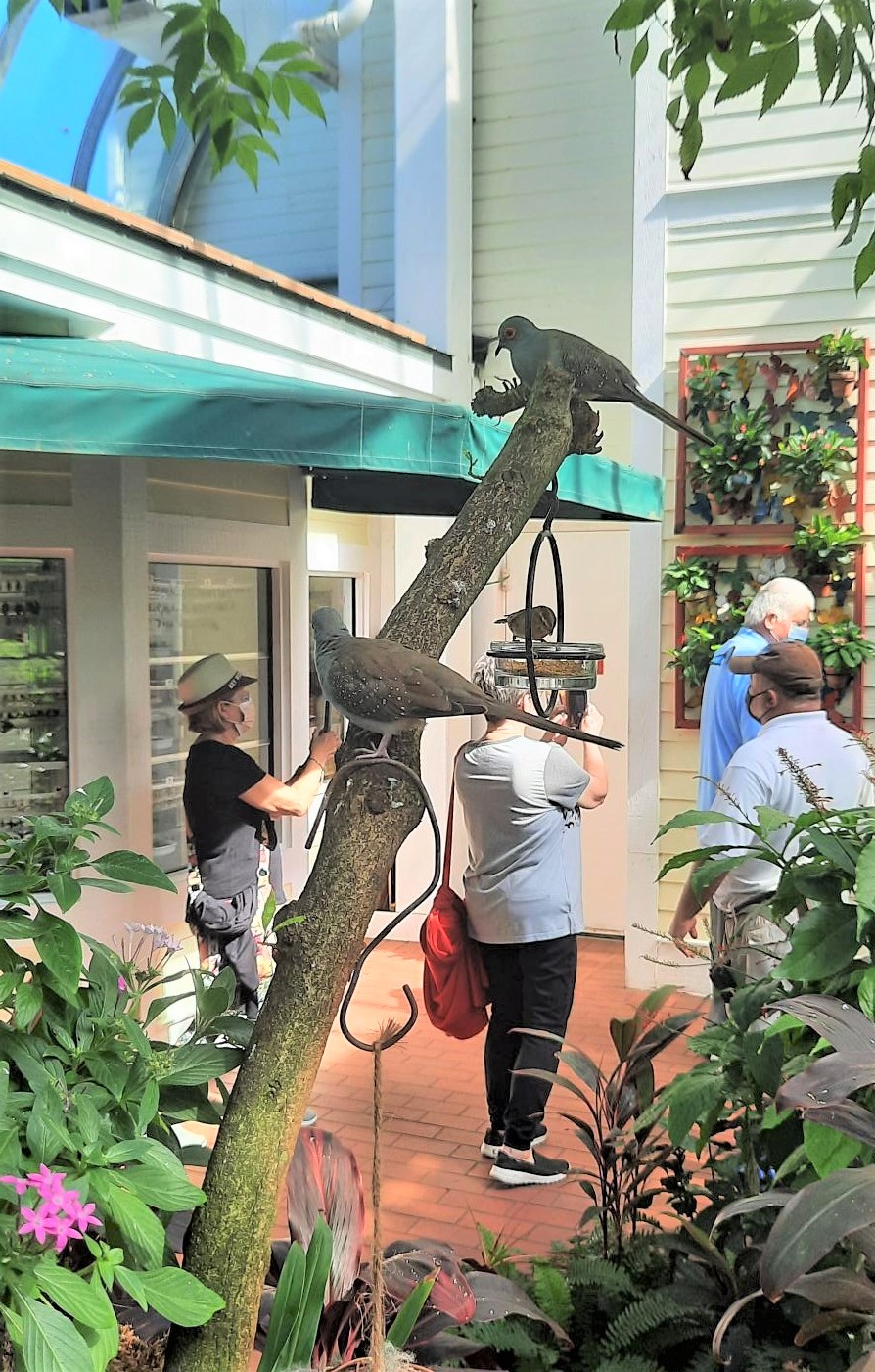 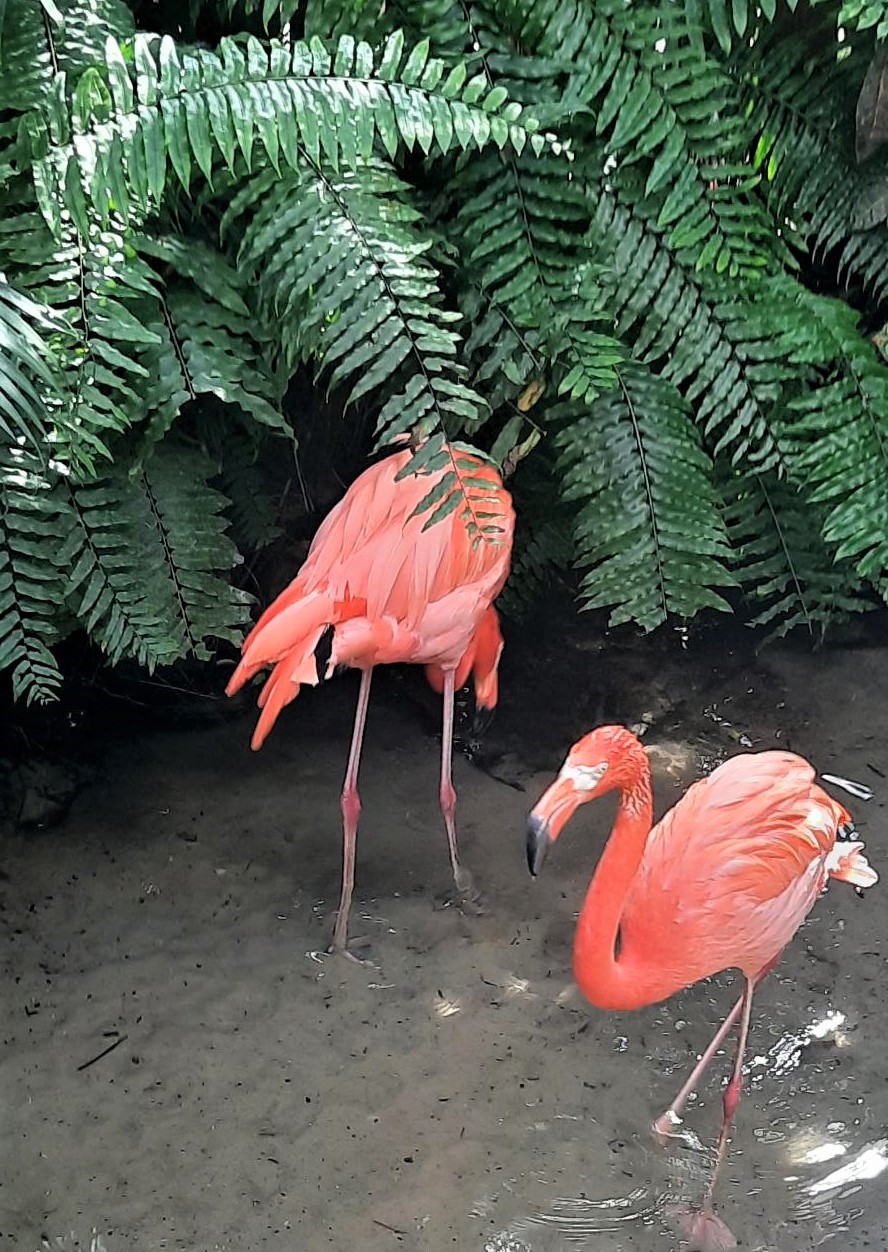 There is another species of birds that get a lot of attention. Their names are Rhett and Scarlett. The paired male and female flamingos have been together for over 6 years.

These two famous-long legged birds add so much to The Conservatory. The conservatory’s ownership started filming Rhett & Scarlet and showing them on their website once a week.

Their popularity started to peek in July of 2017. They became such a success that upper management started sharing live videos on Facebook. People all over America have become loyal fans of these two pink celebrities who were named after “Gone With The Wind” movie characters.

Not only is there a mix of exotic butterflies and birds, but a collection of tropical foliage as well. There are also several smaller waterfalls and ponds.

From this point on, our adventure has become a memorable experience. It was like nothing I have personally seen or felt in a long time. We have provided a short video that will showcase some of Mother Nature’s most beautiful creations. Stay tune for more incredible adventures! 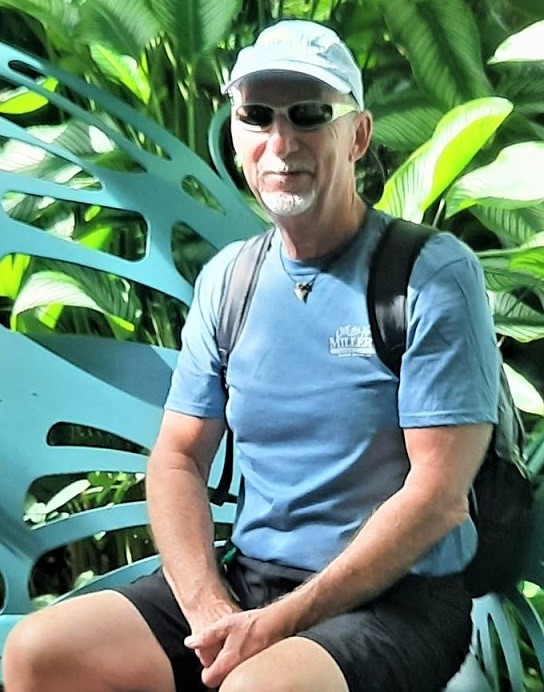 Until our next adventure,
“Love, Laugh & Travel Lots!”