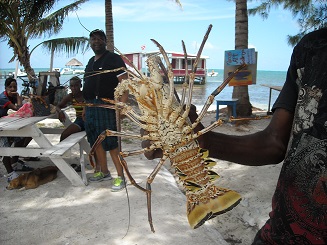 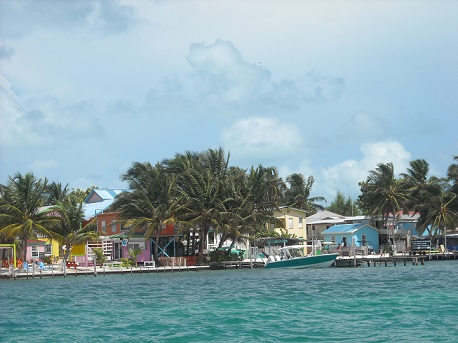 We headed for the water taxi port at around 9:00 in the morning. We have tickets for the 9:30 departure. It is approximately a forty-five minute ride to an island that is north of Ambergris Caye. It was a beautiful day to be on the water. As we pulled into Caye Caulker’s port you could see the colorful buildings that lined the island’s shoreline. The Spaniards named this quaint little piece of land after the Hicaco Plum (Coco Plum), which is plentiful throughout the island. Caye Caulker was formed by a limestone coral reef that is covered with sugar fine white sand. The island is five miles long and a mile wide. It’s year around population has been estimated to be between 1,500 to 2,000 residents.

Tourism was introduced to the island in 1964, which is a large part of its economic survival. In 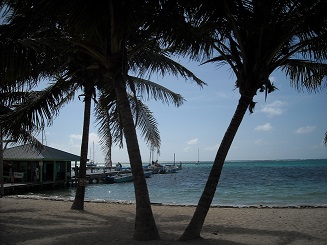 recent years the island has attracted back packers that have been searching for more of a non-commercialized retreat. The island’s laid back atmosphere is also gaining popularity with tourist who are looking for an out of the way place that doesn’t sanction mainstream society. When we stepped off the boat and on to the beach, we knew right then that we were going to have a relaxing day. The only town on the island is appropriately named “Caye Caulker Village”. The town has no fabricated surface streets. They are all natural and formed to the island’s geographical lay. We started our tour south along the palm tree-lined beach.

The mid-morning sun was beating down on us and the island’s humidity was rising rapidly. We came to a spot where the water was a two-tone blue. I threw off my shirt and made a mad dash for the crystal clear water. The water’s temperature was a perfect 87 degrees. After my cooling dip, I drip dried for a few minutes in the warming sun and again proceeded down the beach. A brightly colored open-air building just over the horizon started to look more and more like a libation station, a watering hole, or more commonly known as a bar. The Lazy Lizard seemed to be a place where fun happens. The colorful graphics and graffiti on the walls spelled out to us that we needed to investigate this place a little closer.


The structure looked pretty rustic, but seemed very common in its own environment. We circled the building to give it a once over and then decided to stop and have a refreshing beverage. We pulled up to the bar and positioned ourselves where we could see the small channel that cut through the island’s mainland. There was a newly built dock, a wading area and beach front bar where customers could lounge in recliners. While taking in the views, a party boat motored slowly by our line of sight. We would have not believed it if we didn’t see it with our own eyes. The captain (pictured, upper-right) was steering the boat with his foot. Anything goes when you are in paradise. While enjoying the sun and sights, we watched as people started to gather. High noon was approaching rapidly and the afternoon party was just beginning. We hung around for awhile and marveled at how the free spirited and much younger crowd let their day’s concerns just blow away with the afternoon’s breeze. We finished our drinks and decided to explore more of the island.

On the way back towards the center of town, a food vendor was standing over his half barrel BBQ pit. A young boy was delivering a couple of live lobsters to the cook who was preparing his grill. We stopped and asked the price for the bounty that was just dropped off. Itwas agreeable and our afternoon 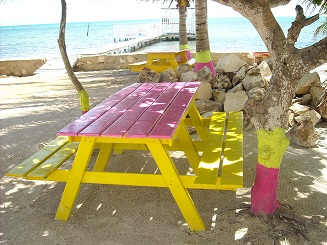 lunch spot was selected. We watched as the cook prepared our feast. It can’t get any fresher than this. Lunch was served on a colorful picnic table under swaying palm trees with the Caribbean Ocean as our back drop. All I can say is: Red Lobster, eat your heart out.

After an amazing lunch, we made our way to the main street in Caye Caulker Village. Both sides of Avenida Langosta are dotted with a variety of homegrown shops. The hard packed streets are easy enough to maneuver when it’s not raining, but when afternoon showers erupt, bare feet are about the only way to get around. However, on this day we were very fortunate to be blessed with clear skies and lots of sunshine. Our tour took us by the local police station. It was a slow crime day on the island, but if they needed to get somewhere quickly, their handy dandy golf cart was right out front and ready to go. Somehow, I think the “patrol cart” is used more for personal reasons than official business. Just saying!

It was getting close to our departure time back to Ambergris Caye. But before we go, what’s a tour without stopping at the town’s local cemetery? We followed Avenida Langosta to its farthest point and turned east. There it was: a small, antique looking plot of ground with carved stone crosses marking the final resting place for past islanders. Our day was complete. We were now ready to venture back to our home port. Caye Caulker is a perfect place to relax and read a book, or maybe even write one. I could see authors coming here and imagining life in a far away place where time has no hands, where worries have not yet been created, and life can be as simple as reaching for your favorite habit with no negative bearing on immortality. Life as it was meant to be!