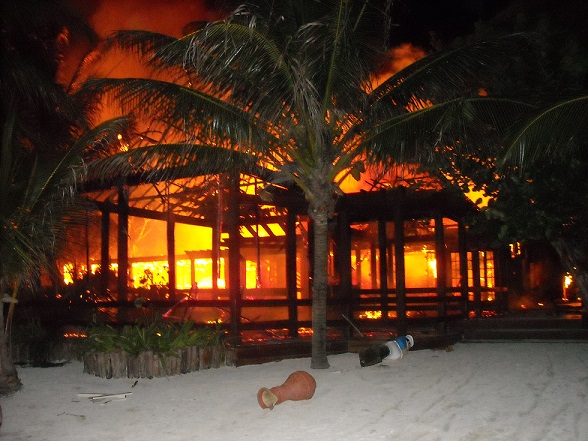 There was a light island breeze the evening of August 19th, 2013. We walked down the beach to try a bar and grill recommended to us by a friend we met on the island. Ambergris Caye is home to a fairly large north American expat community and this particular establishment was owned by a gentleman and his wife from Arizona. We arrived at ABC Pub & Grub around 7:30 pm, meeting up with some people and enjoying a few libations and appetizers. Don and Chris, the owners of the pub, were also sitting with us and explaining why they decided to move to Ambergris Caye and start a new life. During our

conversation, one of Don’s employees said he just received a phone call regarding a resort on the south end of the island being on fire. Rumors spread very fast on the island. We couldn’t see smoke or flames from where we were sitting so my wife got up and went out to the tip of the pier that was directly across from us. She hurried back and announced that she could see a bright glow in the night sky. We paid our tab and headed back towards our suite.

As we got closer to our hotel, we could see flames that reached far above the tops of the palm trees. We found ourselves walking faster and faster and as we got closer we could hear the crackling of burning wood and the smell of smoke. We rounded the corner just in front of our complex and sure enough, Ramon’s Village Resort was engulfed in flames. Minus the metal pipes, certain fixtures and appliances, the unique resort was built with all organic materials. This made the structures very susceptible to fire.

From our vantage point it looked as if the center and north end of the resort were fully involved. The single engine fire department was working feverishly to stop the fire from spreading to neighboring buildings. The flames seemed to have spread from left to right as we looked from the beach and front to the back. The fire was moving at a very rapid pace. The flames had the upper hand and were not giving any ground to the firemen’s relentless efforts to slow its progress. The resort’s staff  was trying to keep the fire at bay on the north side with garden hoses they borrowed from neighboring yards. The south side of the resort was being doused with water from an old fashion bucket brigade.

When we first arrived, I immediately looked to see what I could do to help with this monstrous situation. I saw the bucket brigade line started at the ocean shore and lead all the way up to the fire line. I jump in and started passing trash cans, buckets and any type of container that held water to the front of the line. From that point runners were dodging the flames and splashing the precious liquid onto the fire that was trying to consume the combustible materials. It was hot, humid and the constant feed of containers was weighing heavily on my aching muscles. However, the adrenaline rush was taking hold and pumping energy throughout every part of my body as the buckets came and left.


I did this until I finally needed a few minutes of rest. As I walked away from the water brigade, I noticed hoses and manpower waging a war against the enemy on the north side of the resort. I ran over and found a way into the backside of the resort. The firefighters were giving everything they had to a losing battle. I started to help feed the fire hose forward and backwards so the firefighters wouldn’t have any resistance with kinking or restricted water flow. But It was too late. The fire was uncontrollable and we had to accept the fact that the north end of the resort was beyond saving. We had to evacuate the area quickly so we would not be trapped by the advancing flames. Our efforts would be better used somewhere else.

I quickly caught my second breath and returned to the water brigade. We sent endless pails of ocean water to the front line. People were shouting that we were winning the battle and to keep the efforts alive. At this particular point, the fire was choosing which structures would survive and which would fall to its indisputable power. After a couple of hours of shuffling buckets of water weighing 30 to 40 pounds each, my body’s muscles started to cramp. I had to finally let myself rest. I stood back for a moment and came to the realization that I couldn’t conquer this battle in its entirety. The community of San Pedro was pulling together and trying to save an island Icon. I learned a lot about humanity that evening. I learned that no matter where we are, no matter who we are, we will always help our fellow man or woman in a time of need.