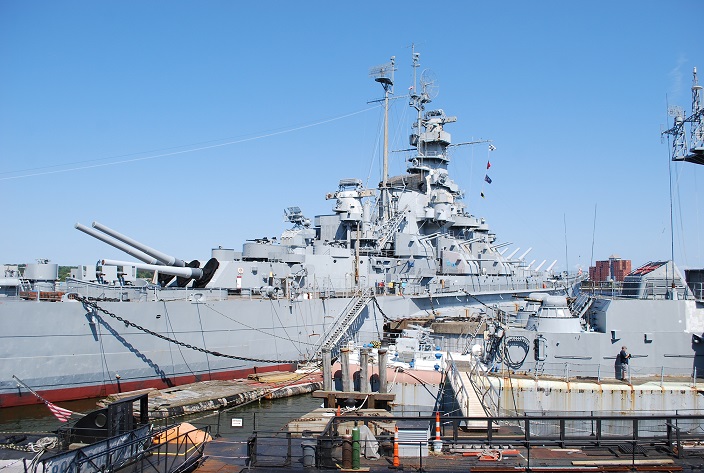 The USS Massachusetts Battleship is a South Dakota-Class Fast Battleship – one of four built in the late 1930s. The US Navy designed these ocean going war-wagons to not only provide superior firepower, but to cruise at speeds of 26 plus knots {approx. 27 – 30 mph}.

The USS Massachusetts is 680 feet long – over 45,000 tons fully loaded – constructed in 1939 and commissioned in May of 1942. The Fast Battleships like the Massachusetts, along with destroyers where designed to escort and protect Aircraft Carriers when traveling towards or into enemy territory.

My name is Anthony and for you who don’t know or remember me, I am a writer and photographer for the travel site, You, Me and The Dock. I will be your guide and narrator for this exciting adventure and the video afterwards. Let’s get started! 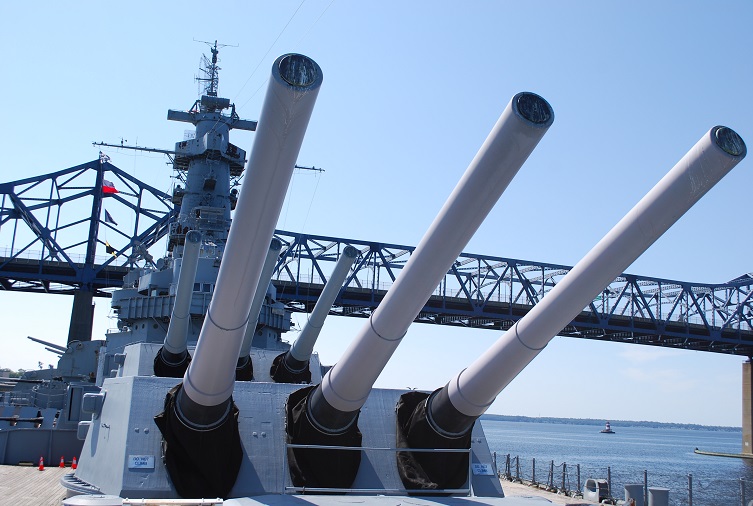 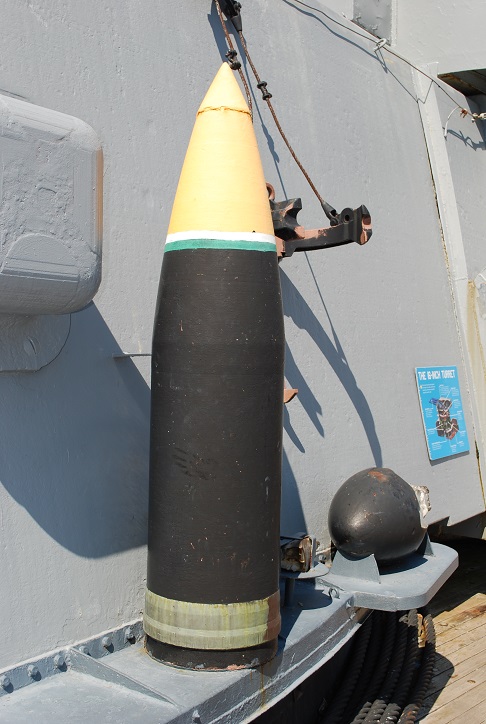 When I stood by this shell, I thought to myself, “How much gunpowder does it take to hurl this piece of explosive metal 20 miles?”. The answer, “It takes 6 Nitrocellulose bags at 105 pounds each to send its payload soring towards its target!” The percussion inside the battleship’s turrets was deafening. 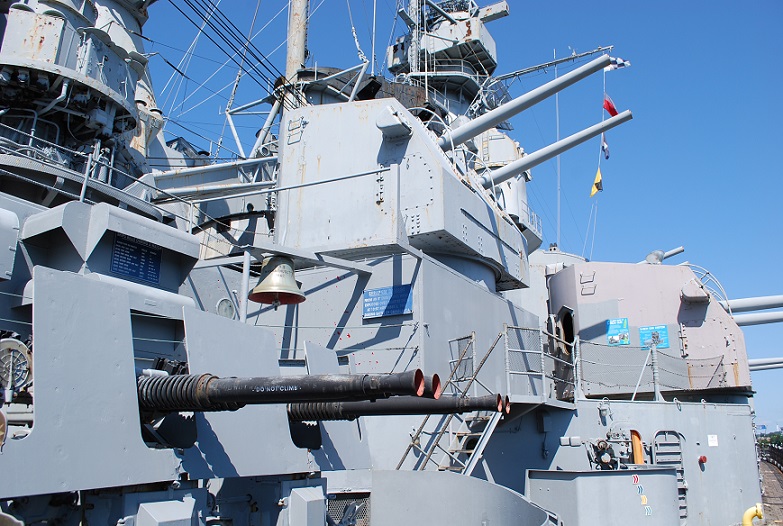 The major purpose of these auxiliary guns are for ship-to-ship combat and surface-to-air attacks. Their importance is vital to the ship and the vessels they are escorting. 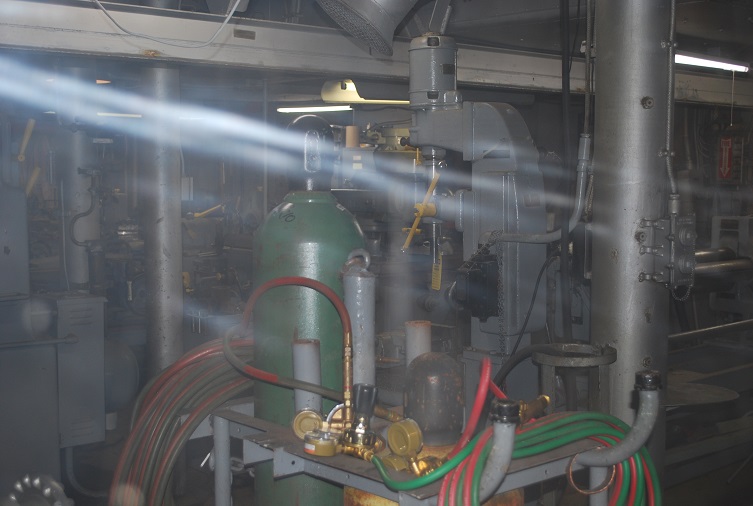 Every ship needs a maintenance shop. Now that we have briefly described the above-deck firepower of this magnificent ship, its time to look at a few of it’s inner departments. 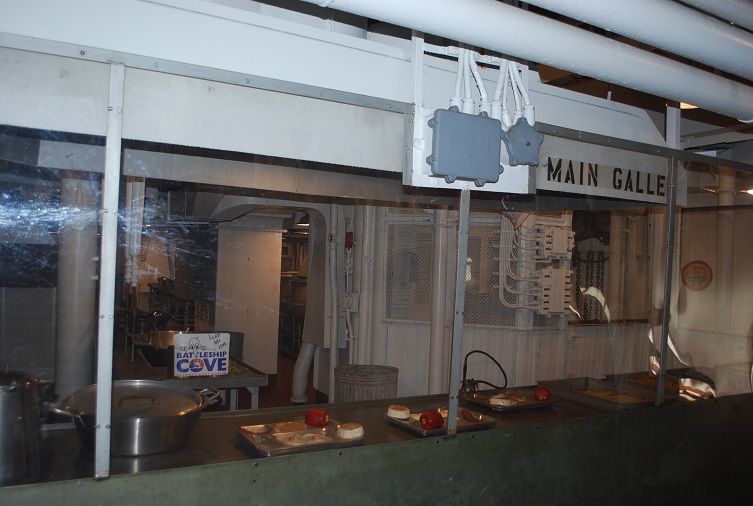 One of the more desirable stations on any ship is its galley {Kitchen}. You can keep the crew’s spirits and energy up by feeding them! The kitchen is fully equipped and stocked to cook just about any kind of food you want. 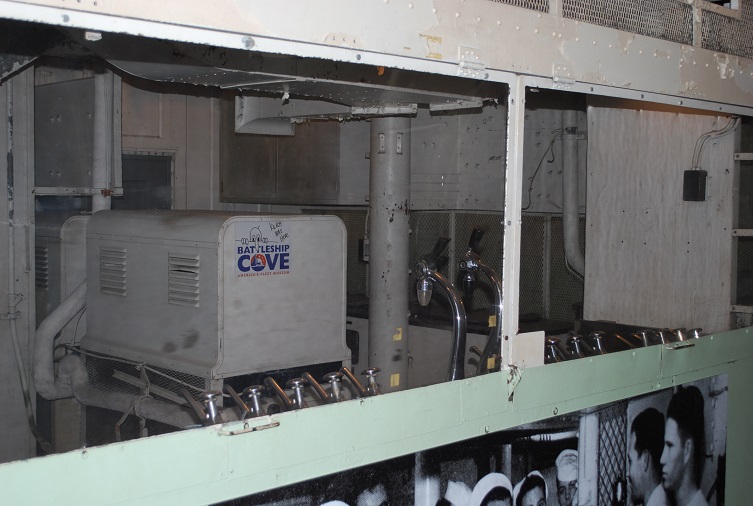 For those special times, the crew could enjoy a soda or an ice cream float. If you’re touring the battleship on a hot Massachusetts summer day, you too can also enjoy a fountain drink. 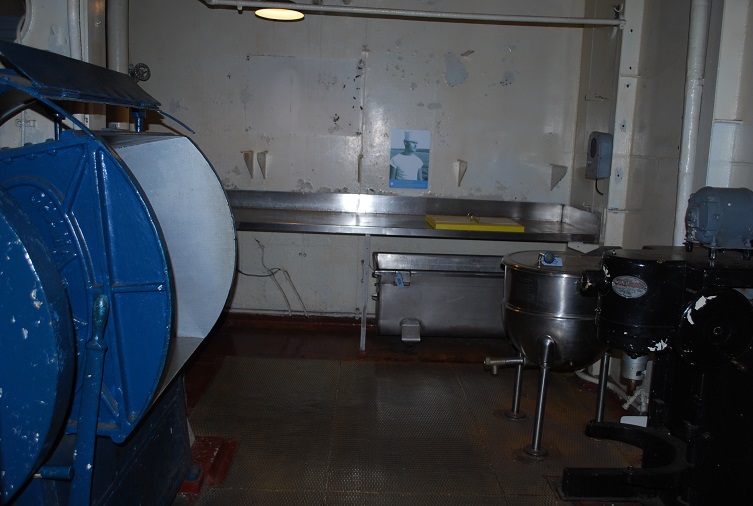 Right between the kitchen and soda counter is a bakery. I suppose when making bread on a daily basis, the aroma could fill the entire dining area. This floating war machine has just about everything you could think of… And then some! 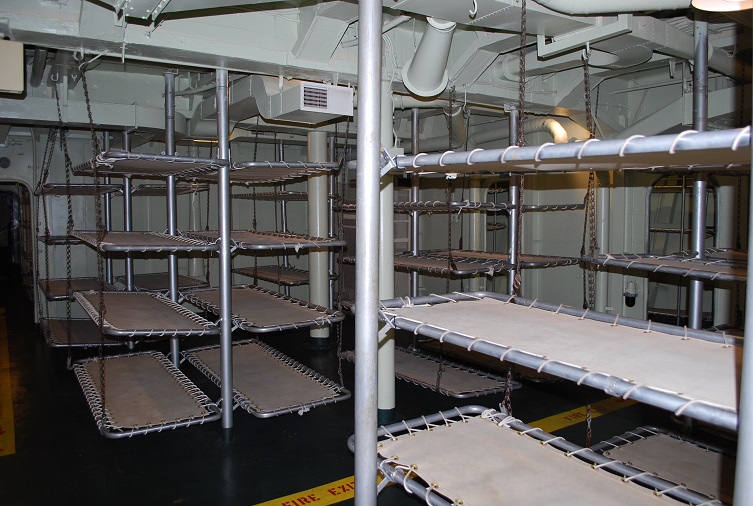 Let’s not forget having adequate sleeping quarters or at least a place to lay your head. The bunks probably had a pillow and thin mattress. 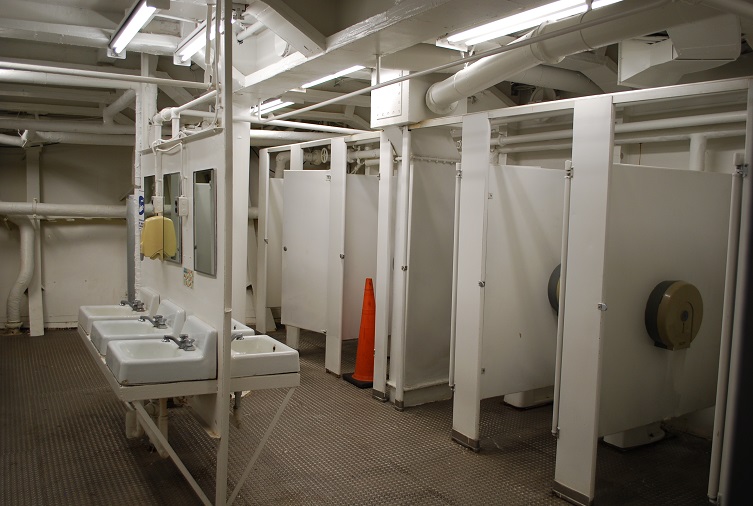 When you have up to 2,500 crew members {during war time deployment}, the ship needs to handle all their showering and personal needs. It takes a lot of coordinating to do this.

The USS Massachusetts has quite the history regarding its active duty. There are obviously way to many stories to tell. However, here are a few highlights that will give you an idea on how importance this battleship was to the Allies in WWII. 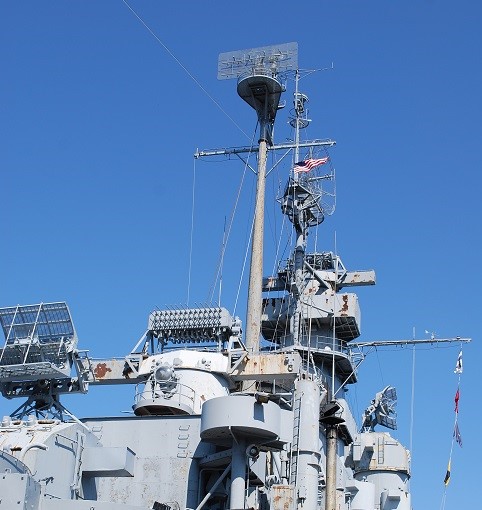 To start this story, the Massachusetts experienced several modifications during the war. One of the upgrades was an SG Search Radar. Located on the foremast, the enhanced radar – microwave (S-Band) vs soundwaves – could detect oncoming or out-of-site ships and submarine periscopes. It made nighttime attacks on enemy ships more precise. 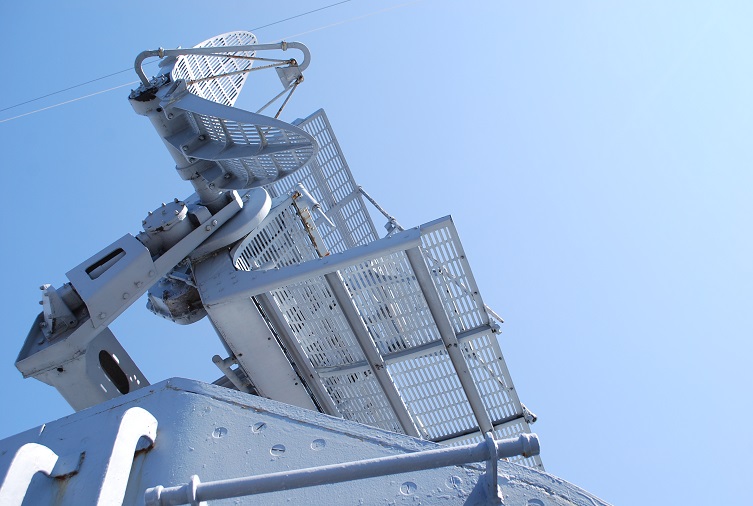 Another improvement made to both the battleships and destroyers was the FCR {Fire-Control Radar}. This increased accuracy to the ship’s battery guns. As WWII continued, there were more additions made that included advanced weaponry and Early-Defense Detection {EDD} for not only ground, but air attacks as well.

In 1943, the USS Massachusetts played a roll in the Gilbert and Marshall Islands Campaign. On June 30 along with the Indiana and North Carolina, they provided cover-fire for an amphibious attack on New Georgia – part of the Solomon Islands. The battleship also participated in the bombardment of Japanese’s positions on Nauru.

The Massachusetts was given the task to provide an all-out bombardment during the Philippines Campaign. On October 10, America began its offensive attack on Okinawa’s airbase. Being part of the the Fast Battleship Task Force, the Massachusetts was involved in the Formosa {Taiwan} attack. Afterwards, the task forced engaged in several battles in the Philippine Islands and San Bernardino Straits. Other operations included support for the invasion of Iwo Jima. This eventually led to defeating Japan’s Emperor and his once powerful war machine. 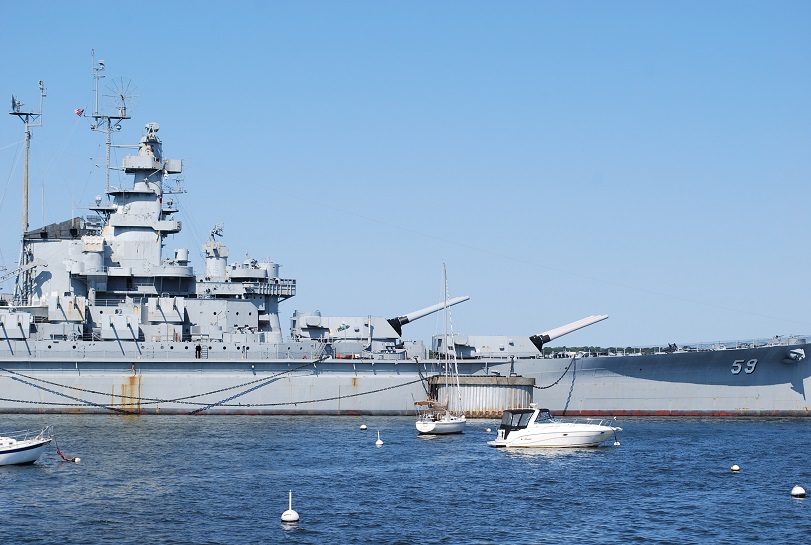 At the end of the war, the USS Massachusetts was decommissioned in March of 1947. After spending time in the Atlantic Reserve Fleet, it was stricken from the Navy’s registration. Several WWII era built battleships were highly modified and kept in reserve. However, most were sold for scrap metal.

The USS Massachusetts escaped a destructive fate and in 1986 was celebrated as a National Landmark. In November of 1998, it was towed to the Boston harbor for some much needed restoration. In 1999, this historic vessel arrived at its final resting place in Battleship Cove – Fall River, MA.

We hope you enjoyed this final segment of our 3-part series adventure. Writing about these three amazing WWII vessels was just as exciting as seeing them live. The short video below will bring you closer to the USS Massachusetts and why this glorious ship played an important roll in keeping America free. 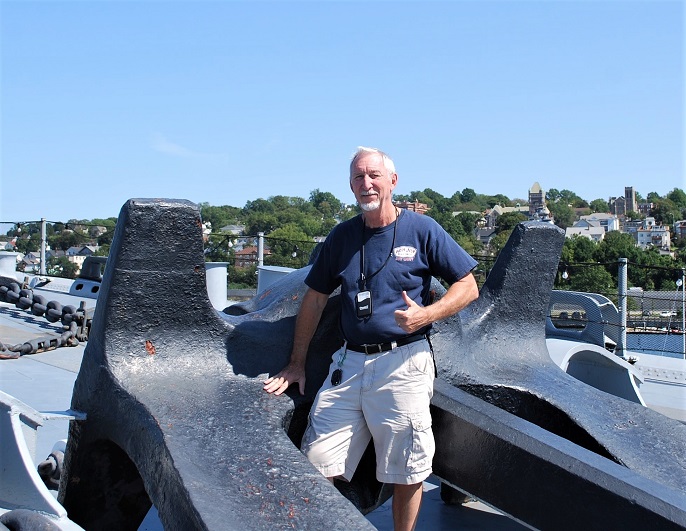 “I couldn’t have done these 3 blog-articles without the help of my wonderful wife. Love you Babe!”