Tybee Island Lighthouse is just minutes away from Savannah. It lies 18 miles east of downtown. It’s a local’s favorite but in the last few decades, it has become a popular tourist destination. My name is Anthony. I will be your guide today on this historic adventure.

I would like to start with a few interesting bits of information regarding this amazing island. To start out with, Tybee Island is home to what was the first Day’s Inn. Can you think of a better place to start a chain of hotels?

Another piece of history that not many people know about is that in 1958, Tybee Island is where the first Atomic bomb was dropped – by accident, during a practice run and was never recovered – lost at sea most likely. It is said that the bomb had no fuse but again, some people are reluctant to visit the island.

On a lighter note. In the late 1950s during a publicity stunt to gain more popularity, the island’s name sake city was once known as Savannah Beach. However, it was eventually changed back to The City of Tybee and maintains that name today.

We ventured onto the island and with time being somewhat of importance, we picked one site that would provide a panoramic view of the island. Being the lighthouse fanatic that I am, the decision for me was easy to make. There are actually two lighthouses in the area. The Cockspur Island Lighthouse was being renovated, so that left the Tybee Island Light Station. The choice was made and we were on our way.

The Tybee Island Light Station is one of seven sites remaining from the 17th century. This colonial fixture was fourth in a series of towers. The 1st tower was constructed of wood in 1736 and fell victim to a storm in 1741. The 2nd was built a year later with stone and wood. However, after several decades and succumbing to erosion, it to was destroyed. Nether one of these towers were illuminated.

In 1773 a third tower was constructed with brick. This time it was equipped with a reflective candle light system, which in turn made it a true lighthouse. It was eventually upgraded with an oil fed lamp in 1790 and in 1822, the tower was again upgraded with a Fresnel Lens. They said that this lens “saved a million ships!”

During the civil war, the Confederate Army burned down the lighthouse before evacuating the area. The tower was again rebuilt in 1866 to only be severely damaged by a hurricane in 1871.  It was eventually repaired and additional updates were done to the lighthouse in 1885, 1933 and 1972.

Finally, with the efforts of the Tybee Island Historical Society, the lone tower once again underwent a major renovation. In 2002 after centuries of destruction and numerous upgrades, the National Historic Society added the Tybee Lighthouse Station to its manifest of America’s Historic Icons. It is now a major sightseeing attraction.

I was eagerly awaiting the 178 steps – 144 ft climb to the observation deck. I have a great appreciation for these magnificent structures that provide a guiding light for seagoing vessels. Another great advantage is the 360 degree views once you reach the top.

The island itself is 22 square miles with a population estimated at 3,000. The Savannah River empties into the Atlantic Ocean which makes it easy access to its port. Summer temps average 88 and usually won’t drop below 47 degrees in the winter.

Once we reached the metal platform that circles the Lanthorn {the room or dome that holds the light and is enclosed by glass}, my senses begin to come alive. There’s something exhilarating about being out on a catwalk with the wind at your face and being able to see for miles.

When I looked up into the Lanthorn, I could see the White-light bulbs that enhances the Fresnel Lens to illuminate up to 70,000 candles. This is absolutely amazing power. Approaching ships of all sorts say they can see the beam of light 18 miles away. It truly has guided and saved many captain’s precious crews and cargo.

After taking in the fresh air and magnificent sites, it was time to carefully maneuver ourselves back down the metal stairs. Once we set foot on solid ground, we visited the two cottages that housed the Lighthouse Keeper and their assistant. Most of, if not all lighthouses had at least one on-site attendant. They were responsible for making sure the light was always on. Isn’t that what ‘Mr. Bodett’ said when he was the spokesperson for Motel 6? I thought I would share a little “Lighthouse Humor!”

I can now add another lighthouse experience to my growing list. I have had the opportunity to tour many national and international lighthouses. Each and every one of them has their own fascinating story. They were also located in beautiful places, provided lots of nautical history, and served an important purpose. Just a heads up on our next adventure. If you like the history of speed, you will love our next blog. Stay tuned! 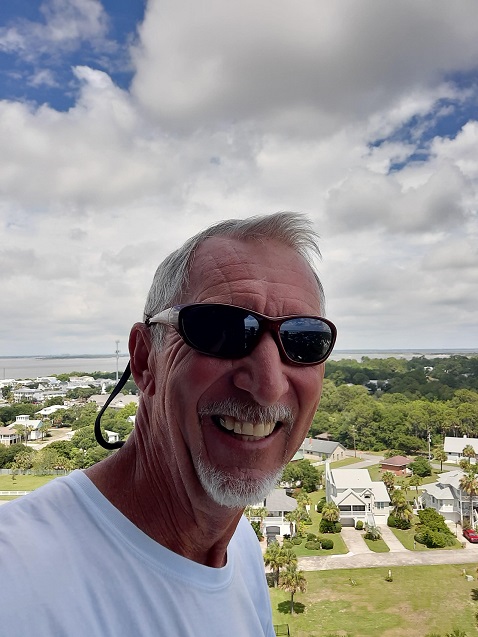 “After visiting the lighthouse, stop in at Coco’s Sunset Grille for some great eats!”