The NASCAR Hall Of Fame adds to my tours of America’s greatest motor sport attractions. My name is Anthony and after the Daytona Speedway tour, I needed to experience many more locations.

Making our way from Florida towards the northeastern states, we made plans to stop in Charlotte, North Carolina. I was so looking forward to our next adventure. Contrary to popular belief, you don’t need to have a pickup truck or be a redneck to enjoy auto racing. And that goes for NASCAR as well!

The 86,500 square foot NASCAR Hall Of Fame opened its doors in May of 2010. It is like no other exhibit hall I have ever experienced. Besides its main attraction, this 19-story complex has a 40,000 sq. ft. Ballroom, parking garage, Buffalo Wild Wings Bar & Grill, and is home to NASCAR’s Production Imaging Studios.

I was like a little kid waiting for Santa Claus on Christmas Eve. I purchased an upgraded ticket that allowed me to take virtual laps while sitting in an actual race car. When we first entered the glass enclosed pavilion, we couldn’t believe our eyes. It was literally a jaw dropping sight. I felt a shivering tingle rush from my head to my toes.

The first exhibit you come to is the High Octane Theater. This state-of-the-art screening room has a 64 foot curved screen, an amplified surround sound system and 278 high-back luxury seats. The approximately 15 minute viewing takes you from bootleggers, to the sandy beaches of Daytona, to present day championship tracks. If you have never been in the stands or in the pits of a race, here is your opportunity to see and feel what it’s like!

After exiting the theater, the realization of being surrounded by a collection of historic cars suddenly hits you. I will never again be around this many cars that were driven by some of the world’s greatest drivers. Names like Petty #2, Earnhardt #3, Gordon #24, Parson #72, Stewart #20, and Hamlin #11 to mention a only few. There are cars from just about every era of oval-dirt and blacktop racing.

Being a moonshine driver in his early years, Red Vogt finally found his calling and that was building race cars. Red Vogt’s 1939 Ford Coupe was the first car to win an Official staged NASCAR race.

In January of 1920, prohibition was enacted by the US Department of Justice. Red and other Bootleggers used stock looking cars that had modified engines and beefed up suspensions to outrun law enforcement. It took lots of skill to handle these cars on the back roads of America.

Before prohibition ended in 1933, Bootleggers, who preferred Fords at the time, would race around homemade dirt tracks in front of onlooking spectators. These unregulated and unofficial races became very popular attraction throughout the south. Eventually, the sport of auto racing came to the beaches of Daytona, Florida.

In 1947, a shop mechanic by the name of William “Bill” France from Washington, DC relocated to Daytona Beach. He worked on several race cars and at the same time, helped organize the racing events. Bill saw the disorganization and the mismanagement of funds by the sponsors and race officials.

Bill decided to step in and laid down some basic rules. He enacted several track rules that kept the drivers much safer. Bill also assured that the drivers would receive the money promised to them from race officials. All of his efforts paid off and in 1948, the National Association for Stock Car Racing – NASCAR was born. After that, the rest is history.

As we moved up the ramp, memories came back of past drivers and their achievements. One number that will live in the hearts’ of many NASCAR patriots is Dale Earnhardt’s 1996 – #3 Chevy Monte Carlo. He was given the nick named, “The Man in Black” every time Dale showed up.

I wouldn’t be true to my employer if I didn’t include this photo. From 1999 – 2008, Tony Stewart under Joe Gibbs Racing Team and Home Depot as the primary sponsor, won 2 Cup Championships.

The stadium size lobby has a sloping walkway that follows a mock-blacktopped track filled with some of NASCAR’s most famous driver’s cars.

Throughout the building are several displays that allow people to interact with them. There are exhibits where you can assemble an engine, put together a race car, and do a tune up on a high performance engine. I would of liked to have gotten more pictures, but the hall was so busy that I couldn’t get clear photos.

The 3rd floor is where you can physically get involved. There is a simulated pit stop where you change a tire and gas up a race car {fuel excluded}. You compete against participants before you. Here is where I also got to drive a car around a track simulator.

You first register your name and then get assigned a car. I had car #21 and from what I found, it is with the Wood Brothers Racing Team and is driven by Matthew DiBenetto. Before jumping into the car, they give you instructions that include how to shift, accelerate and brake.

They put you into the car and yes, you have to wear seat belts. You are now on your own. There is a huge screen in front of you. The pace car leads everyone around for one lap and then hold on tight. You can hear the pit boss talking to you while cars are moving in and around you. What were probably the most intense moments was trying to dodge the crashes. 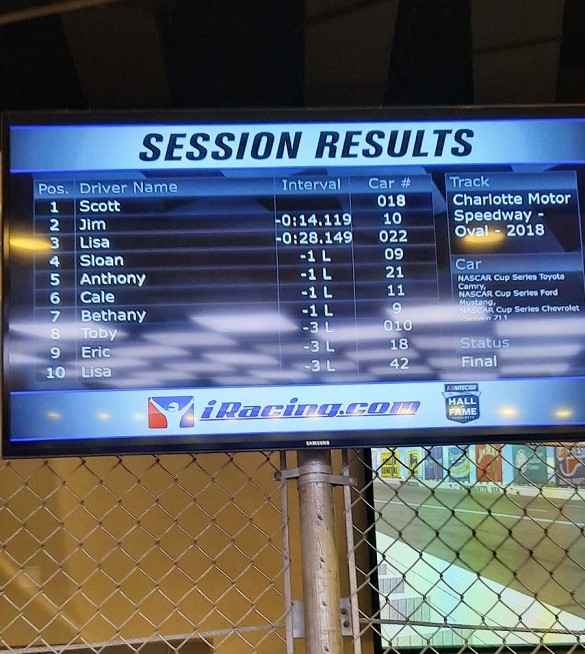 It wasn’t all visual, the seat also rumbled and the car tossed back and forth. If you wrecked, you started from the pit area and had to roar back out onto the track from there. I can proudly say that I did not wreck once in 5 laps. By fault or collateral damage, most everyone in my group was involved in a crash.

According to the session results at the Charlotte Motor Speedway, I ended up in 5th place. I guess most of us got lapped by the 3 leaders but again, this was a kick in the butt! If it wasn’t getting so busy and we had more time, I would have done it again.

The time spent at the NASCAR Hall of Fame was so much fun. Not that I didn’t ever watch auto racing – more of a drag racing fan, but I really didn’t become an oval track enthusiast until I got into my later years of life. After doing the tour and article on the Daytona Speedway, my interest began to grow rapidly.

If you’re ever in Charlotte, NC and its downtown area, I would highly recommend visiting The NASCAR Hall Of Fame. The city also offers great restaurants, several museums, and plenty of historical sites.

We hope you enjoyed this exciting adventure. We here at “You, Me and The Dock” try to bring quality and family friendly blog articles. If you have any questions, go to our Facebook page – https://www.facebook.com/youmeandthedock and contact us. We would appreciate hearing from you.