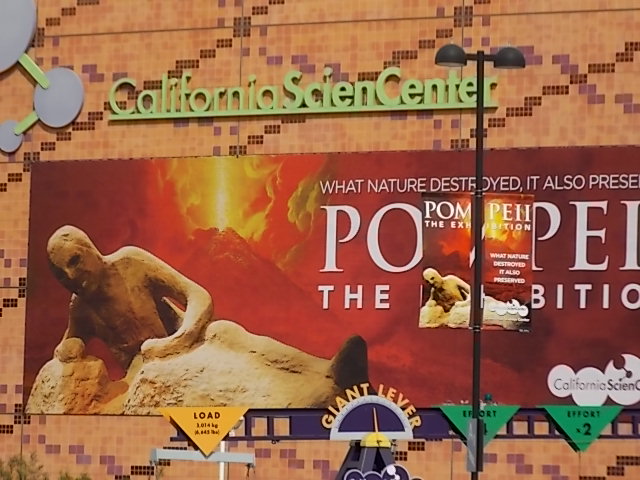 The California Science Center is an amazing place. It has something for all age groups. It is located next to the University of Southern California in Exposition Park. Memorial  Stadium, where the 1984 Summer Olympics were held is on the same grounds. We started our adventure in the main lobby. General admission is free for the permanent exhibition galleries. However, there are charges for parking, special exhibits such as the space shuttle Endeavour and the IMAX Theater. There is a small food court, souvenir shop, vending machines and an ATM in the main lobby area. 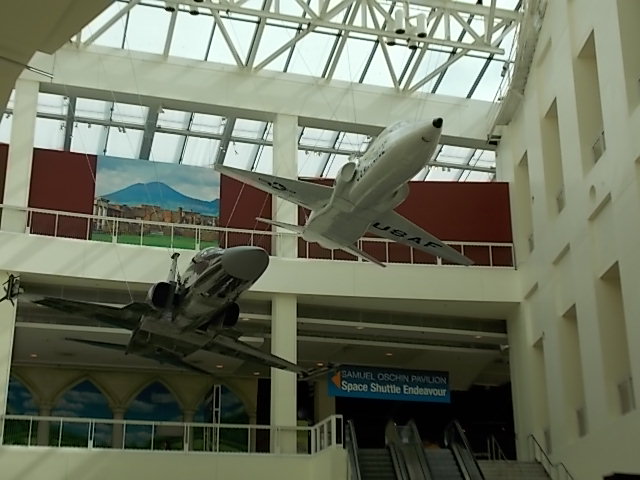 Once we entered the center, it was very evident that our journey was just beginning. The glass roof that towers high above our heads allowed the day’s  sunlight to shine in. The fighter jets that are suspended from the ceiling display their once superior power in the skies above. The escalator took us to the mezzanine where we stood in line to enter the Endeavor’s exhibit. 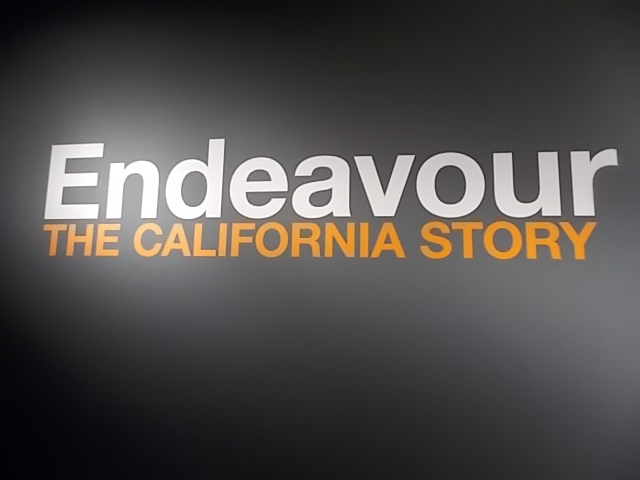 We where minutes away from  experiencing a piece of history that has been viewed and admired by millions of people worldwide. We shuffled through the crowd and down a few flights of stairs until we came to what seemed like an exit door. This lead us down a pathway to another building entrance that opened up to a large gymnasium type area. My anticipation was so heightened that I didn’t know if I was going to gasp in awe or simply stand there in disbelief of what I was seeing. There she was. Bigger than life and proudly displaying her magnificent aero dynamic physique.

The Endeavour; OV-15 was the fifth and final 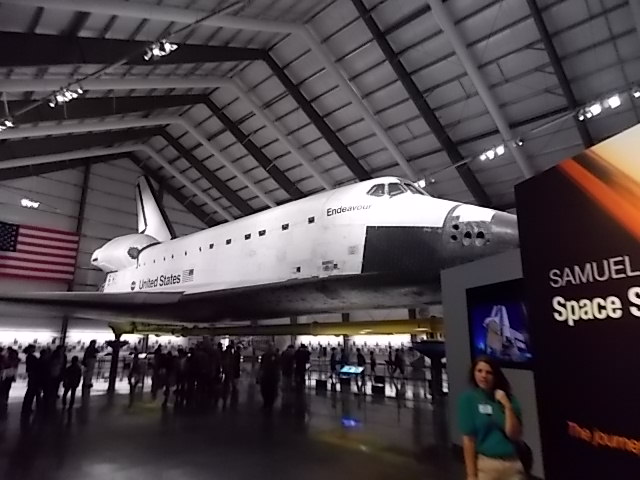 NASA space worthy shuttle to be built. It completed 25 missions and accumulated 296 days in space. Since May of 1992, the Endeavour has been a crucial instrument in the United States Space Program.

Here are a few more facts that I found interesting. Did you know that the shuttle enters the earth’s atmosphere upside down? This helps slow the speed of the shuttle during

its re-entry. The shuttle’s outer- tiled skin reaches upto 2,732 degrees Fahrenheit. That’s a bit warm. The 3,000 plus black and grayish colored tiles were numbered and logged for inspection after every flight to see if they would endure another orbital trip.

NASA had nine Space Shuttle Main Engines (SSMEs) ready at all times. There were 3 engines on the shuttle’s aft that helped launch the orbiter into space. There were 3 SSMEs ready to launch another shuttle for rescue purposes if needed, and 3 more on standby at all times. The SSMEs burned a liquid hydrogen and oxygen mixture supplied from the external tank for approximately eight and half minutes. The shuttle would reach a speed of approximately 17,500 mph. This was necessary for low earth orbit. There has been 51 SSMEs throughout the space program and 35 of them have been used by the Endeavour. 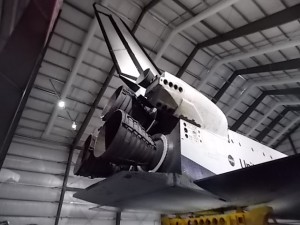 The SSMEs, also known as RS-25 produces 418,00 lbs. of thrust on take off. The SSMEs, along with the solid rocket boosters (SRBs) were fed from a 66,000 lb. external fuel tank. Martin Marietta (a.k.a. Lockheed Martin) found that by not painting the copper-alloy tank would save somewhere in the neighborhood of 600 lbs. The external fuel tank would break up before impact with the water and were never recovered. The SRBs on the other hand, would parachute back to earth and be retrieved.

The 3 engines that set on the space shuttle’s aft (pictured right), have a diameter of 28.5 ft. each. They seemed rather small for such a mighty craft, but obviously did the job. There were 5 shuttles; Columbia, Challenger, Discovery, Atlantis and Endeavour. The last mission into space by a shuttle was completed by Atlantis in July of 2011.

This particular field trip has been one of my favorites by far. I vividly remember watching these beautiful structures on television soar into space. It always thrilled the kid-side of me and brought back memories of when I wanted to be an astronaut. 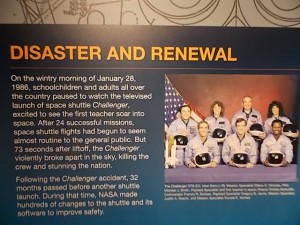 Remembering the space shuttle Challenger;
Let’s not forget the seven astronauts that lost their lives on January 28, 1986.