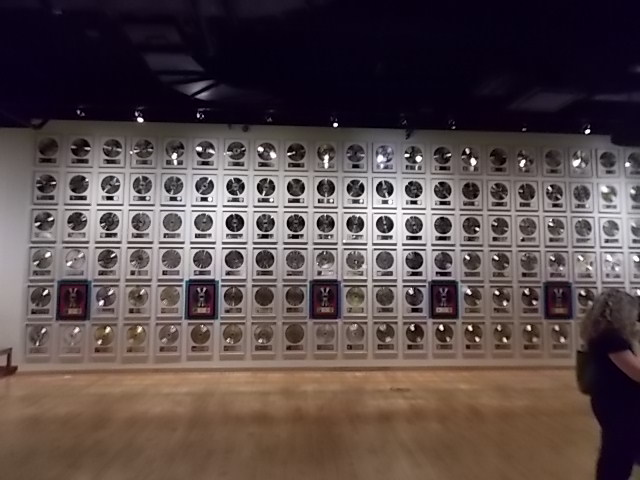 The city of Nashville has plenty of history to see and  experience. Alongside all the small music venues is the Country Music Hall of Fame (shown left), Country Music City Walk of Fame Park (shown below) and the Ryman Auditorium that will be featured in an upcoming article. I will also talk about Nashville’s  newest convention center further down in the article. We turned off Broadway onto 5th Avenue and  started following the signs that directed us to the Country Music Hall of Fame (CMHOF). But on the way we decide to take a stroll through Music City’s Walk of Fame Park. The park is across the street from the CMHOF. The mix of stars that are inlayed in the pebble textured  walkway are very diverse. Below are some of the artists who represent a wide variety of music styles. What country music walk of fame wouldn’t include Elvis Presley, Alan Jackson and Dolly Pardon. But Kid Rock? It just goes to show you that music unites everyone with its collaborating melodies and infamous tunes. The CMHOF has a fabulous array of personal memorabilia, recorded events and entertainment history that will catch the attention of any music style buff. We entered the museum and began our tour through time. The pictorial below will give you a small taste of what we saw.

There are rows of showcases displaying wardrobes, instruments and pictures from past and present country music stars. I am sure that any country music fan or movie enthusiast will recognize this iconic prop (shown right). The 1980 Pontiac Trans Am was the center of focus in the Movie Smokey and the Bandit II.

Merle Haggard (shown below) is an All American country western song writer, singer, guitarist and a very talented instrumentalist. Merle was awarded the ACM (Crystal Milestone Award) at the 49th Annual Academy Of Country Music Awards that aired on April 6, 2014.

The CMHOF  features a variety of recorded  music  memorability. There are walls filled with decades of music awards. We enter a room that has countless albums that are  engraved with hit songs. Their gold and platinum colored emblems (shown below) shimmer brightly against the cellophane walls. You would spend hours counting all the plaques. The heart and soul of country music lives in Nashville. Nashville’s new Music City Center sits across the street from the CMHOF. The Music City Center Coalition was formed by a group of business leaders. Their relentless pursuit and dedication persuaded the Metropolitan Counsel of Nashville to approve the enormous project. On March 22, 2010 the official ground breaking ceremony kicked off Nashville’s state of the art convention center. The 16 acre site took three years and 7300 workers to complete.

Downtown Nashville offers up a perfect vacation for the person(s) who loves great music, various venues and plenty of southern style hospitality. Don’t forget to stop in at the visitors center’s and sit in on a live taping of the national syndicated Bobby Bones radio show. You won’t be disappointed.