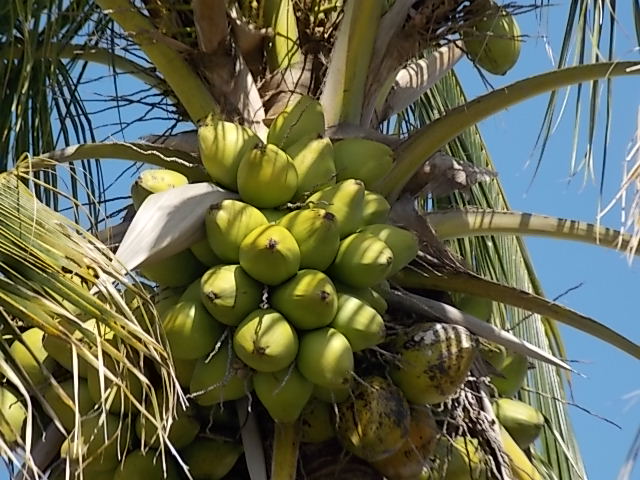 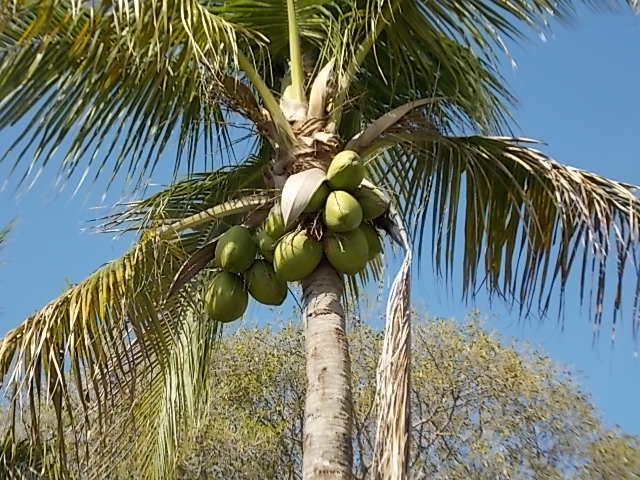 Maureen and I are very fortunate to live in a tropical environment where palm trees are plentiful. The coconut tree Arecaceare – part of the palm family, also grows here. The coconut palms produce their fruits year-round. The coconut is actually a Drupe – it is considered a fruit that has a seed inside of it. The Exocarp  – the husk that surrounds the fruit protects the elements inside. The “white” meat that encompasses the seed is called Endocarp. And if that’s not enough information, the light mucus-membrane that lines the water carriage that holds the seed is known as the Endosperm.

I hope that gives you a little insight about the coconut’s genetic make up. The water from this

fascinating fruit can be used for various drinks.  The two alcohols that mix well with coconut water are rum and vodka. A few common rum drinks are pina colada and a Bushwacker (coconut, Kahlua & rum). I found one drink that would appeal to the more adventurist drinker and that is the “Surfer on Acid”. This drink includes rum, coconut, Jagermeister and Pineapple juice. It can be served on the rocks or as a shooter. Another interesting drink is the “Rock Lobster”. It’s formula includes rum, banana, pomegranate, coconut and orange. Rum seems to complement coconut really well.

There are a few vodka drinks that are also made with coconut water. There is the “Coco Light Martini”. It consist of vodka, coconut, pineapple and a lime twist. The “Aspenlicious” is a martini of sorts for people who enjoy a sweeter cocktail. Its ingredients include vodka, rum, amaretto, coffee liqueur, half & half and a dash of chocolate syrup. Then there is a drink that I call “The Caribbean Sunset”. I make it with vodka, coconut and a splash of cranberry juice. I am sure there are many more you could add to this list.

Unlike Coconut Leo in Ambergris Caye who climbs coconut palms like there is no tomorrow; I have to wait until they fall to earth under mother nature’s own demise. Belize is where I experienced my first fresh coconut water. After that I was hooked. But, instead of using a razor sharp machete to open the succulent fruit, I decided to use my trusty drill. I hone out three holes in one side of the coconut. I then flip it over so the three holes are draining into a plastic container. I drill two more holes in the upside to increase the flow of fluid. I put the coconut water in the refrigerator and make sure I drink it by day’s end.

Besides tasting good, coconut water has lots of nutritional value. The water contains essential vitamins, minerals, electrolytes, enzymes amino acids and many more nutrients that are very helpful for sustaining good health. The amazing liquid also boosts your immune system via cytokines. The water is also high in B-Complex and is very good for the digestive system. Over all, coconut water taste great and can be used in many recipes. You can enjoy your favorite drink knowing that not everything in your glass is bad for you. Party on! 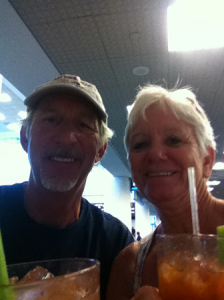