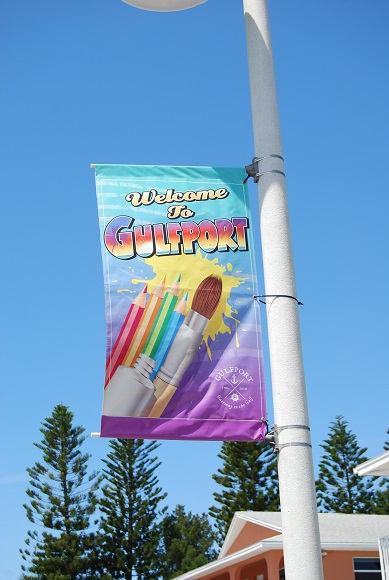 The Grand Prix of Gulfport celebrated its 3rd annual competition boat racing and boat show on March 29 thru the 31, 2019. There were plenty of vendors serving great food and refreshing beverages on a beautiful sunny South Florida weekend.

This exciting event is circled around Formula 1 {F1} Powerboat racing. These low-profile – wedge shaped speedsters compete mostly on lakes, large river-ways, and sheltered bays. They are compared to Formula One race cars on water. They possess similar traits which include high pitch sounds, smaller in size compared to other race cars, and have the capacity to turn on a dime. 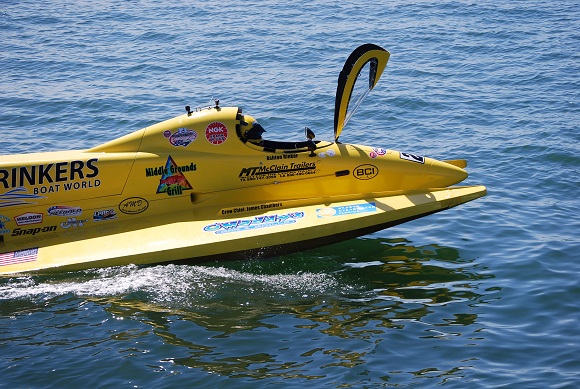 Formula 1 boats are 20′ long and 7′ wide. They are made up mostly of Carbon Fiber and Kevlar. Their dry weight is approximately 860 lbs. These V6 – two stroke engines produce 400 horsepower and reach top speeds of 155 mph. That’s pretty fast when traveling over water. 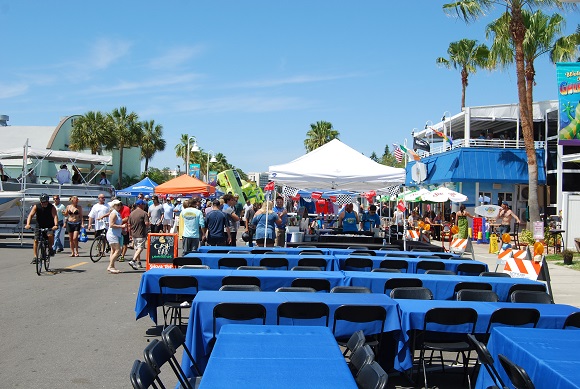 The Grand Prix of Gulfport is an all-around event which includes a boat show, live entertainment, and plenty of food and drink. Downtown Gulfport is a small bay side community that normally keeps a low keyed atmosphere. But all that changes when the Grand Prix comes to town and people flood the streets. Watch and see! 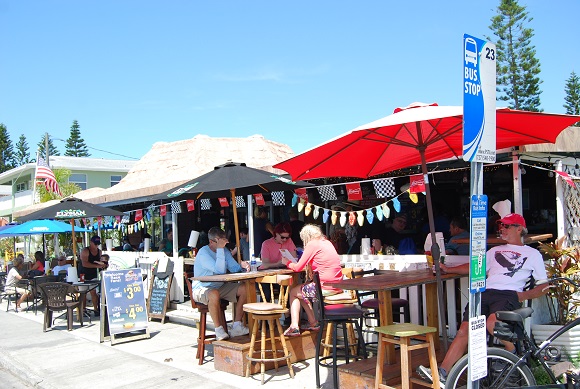 People come from all around the area to enjoy this annual event. Just walking around hearing the music coming from the outdoor free stage and the aromas give an ‘air’ of excitement. The weather is perfect, spirits are high, and a festive attitude is had by all. There is no other place to be but here at the Gulfport Grand Prix! 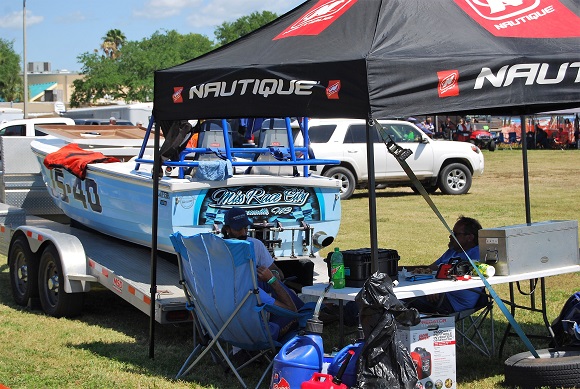 The day’s racing events started with the Jersey Skiff Boats. The JS Class is a type of racing boat that is required to utilizes a small block GM motor. They can not have a dry weight over 1,600 pounds. It can be constructed of wood or fiberglass. They must have a roll cage and carry two occupants – pilot and co-pilot. Even though we didn’t have the opportunity to provide action shots, the races where never-the-less exhilarating! 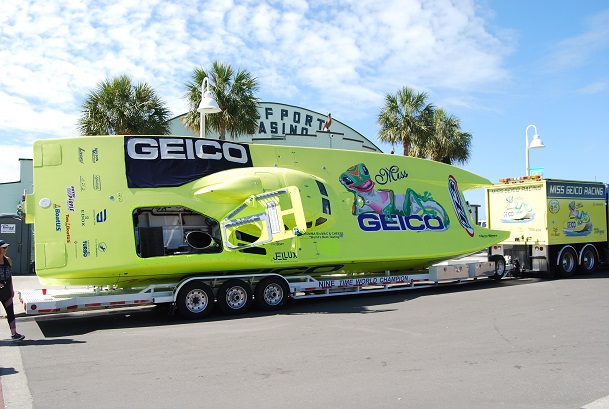 There are breaks between racing events. This let’s people walk from the pier to the festivities that line Gulfport’s main street – blocked off for the weekend. There are plenty of exhibits to enjoy like a variety of boat retailers, water sport companies, and other miscellaneous vendors like GEICO Insurance. GEICO brought along their Class 1 Race Boat for display! These high-powered Catamaran styled race boats thunder along the water’s surface at speeds in excess of 200 plus mph. Their team holds an impressive four World Championships! 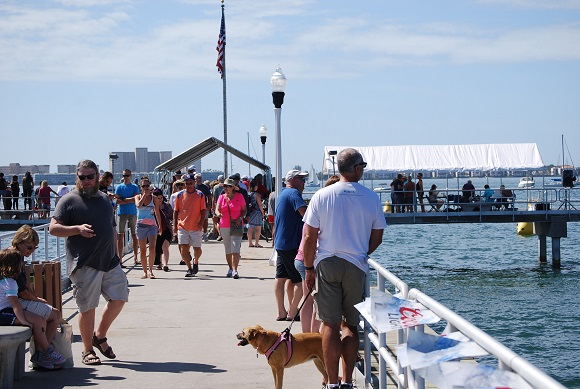 The announcement over the loudspeaker that Formula One racing will begin within the half hour, created a sense of urgency to select a viewing location. The pier is situated on one of two hairpin turns and stretches along the straightaway to the finish line. This was an ideal spot to get a great view of the track. 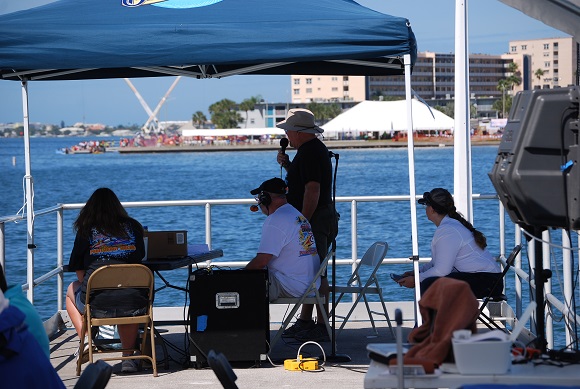 The judges, race starter (flag waver) and marshals, along with the play-by-play announcer’s post are at one end of the pier. This leaves the rest of the pier – its walkway and west end of its ‘T” shape for the spectators. Several race fans start to gather early in hopes to watch the pre-race practice run. Once you find a spot, you better stay put. 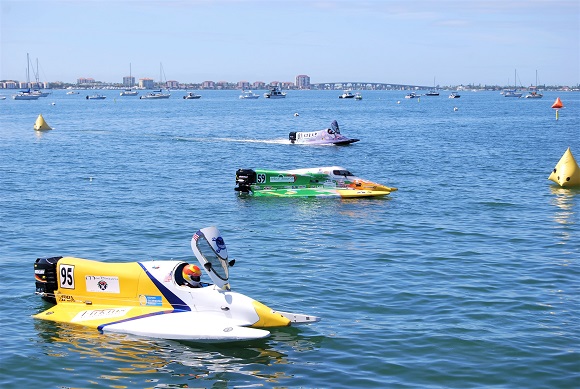 When the drivers take their F1s out onto the course before going to the starting line, they will take a few laps around the course. This gives them a feel for the course and the water’s pitch and surface conditions. Knowing this helps keep the racers from crashing and flipping over. But with that in mind, there are several rescue boats with divers and safety equipment for such emergencies.

After taking a few practice runs, the drivers flip their cockpit lids open. I can’t tell you for sure but when you are enclosed in tight quarters, under Florida’s intense sun, and being on the water can get extremely warm. 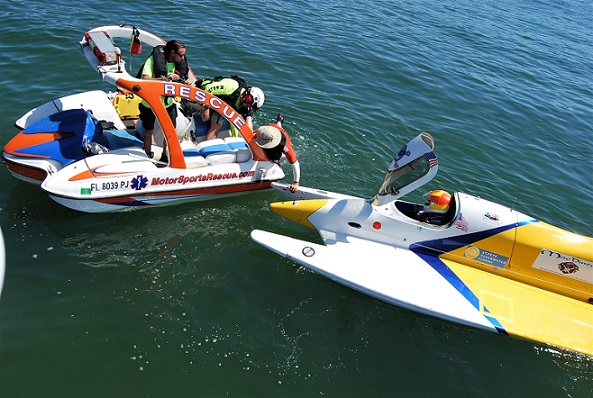 Just like any other racing machine, things can go wrong. On one of the practice laps, number 95 – Mark Welch loses a starter. The towboat which also serves as a rescue boat, takes Mark back to the pits for hopefully a quick repair.

After Mark’s crew figured out the problem and got the F1 back on track, the race was ready to start. 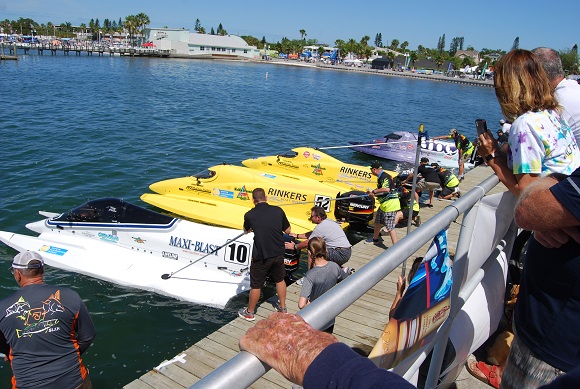 The starting line is quite different than their four rubber-legged counterparts. Besides being on the water, 2 members of the crew hold the Formula F1 boat in place at the starting line with long poles. The engines are soundless and the drivers are completely focused. Its so quiet that you can hear the water slapping against the boat’s hull. The announcer counts down the final seconds. All of a sudden the flag drops, engines come alive, and the race is on! 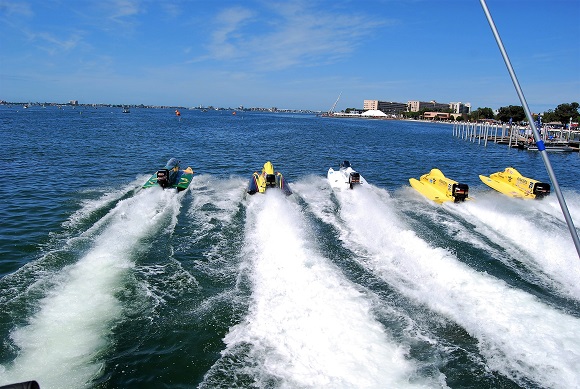 Its a mad dash to the first hairpin corner. The first driver to reach the corner holds a big advantage throughout the race. 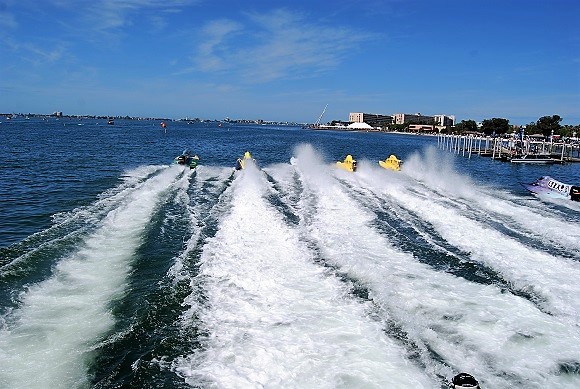 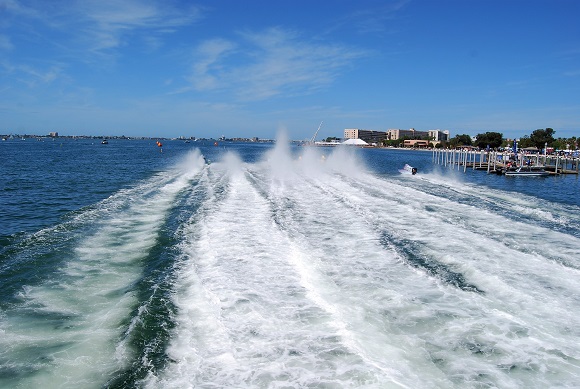 The once calm white-water explodes into liquid pillars reaching heights above its surface. The high pitch sounds from the exhaust pipes add to the overall excitement. These Indy styled – high octane water rockets glide along the water’s surface at speeds of 150 plus mph. 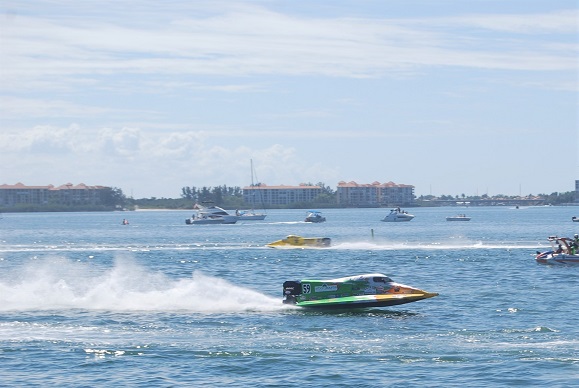 Formula 1 boat races usually last no longer than 25 minutes. The first start ended with a flipped boat in the first hairpin corner – featured in the video below.

There must be a clean start with no disruptions going into the first turn. The boats operate under the same caution flags as their 4-wheel counterparts. As of yet, the official results of the Grand Prix have not been posted. 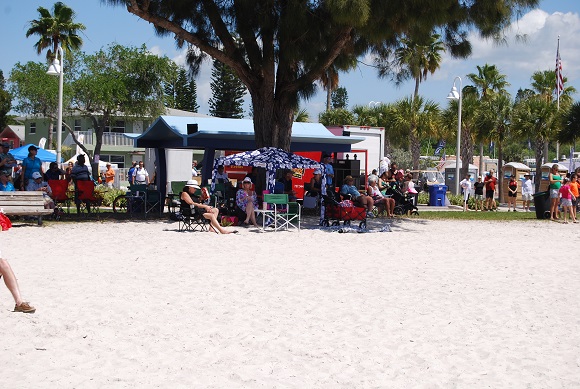 The thousands of Spectators watched from various points. Besides the pier, people line up along Gulfport’s sandy beach. They set up tents, chairs, and coolers filed with plenty of snacks and beverages. While the kids play in the sand, the adults can watch the races. 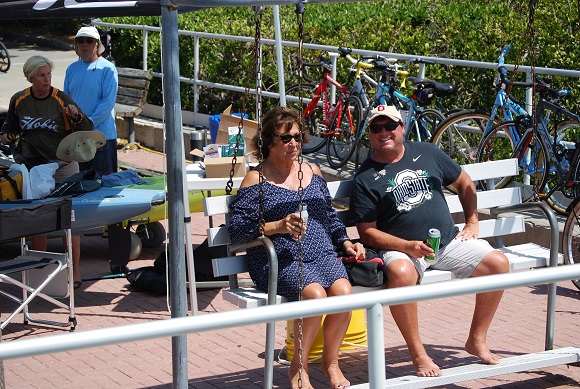 There were also onlookers who were leisurely relaxing, enjoying a cool beverage, and soaking in the day’s sun. There really isn’t a bad seat in the house!

Overall, the day was filled with plenty of great racing and awesome weather. The scenery wasn’t that bad either.

The brief video provided not only has plenty of race action, but a street level view of the festive surroundings that make this fabulous event what it is today. We here at the travel site – You, Me and The Dock, highly recommend our followers to visit this fun filled family outing. “What a fantastic way to spend a day!” 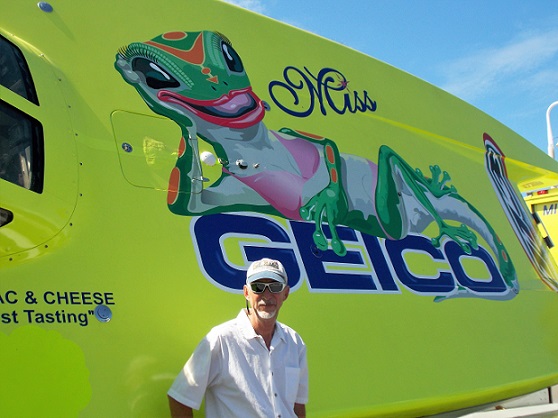