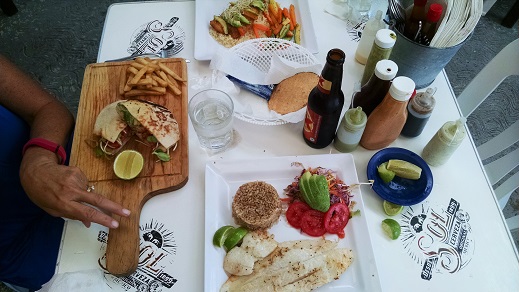 Mexico Cuisine makes its mark as one the world’s most desired foods according to CNN Travel.

CNN Travel also announced the two most favorable Mexican dishes and they are Tacos (ranked 23) and Fajitas (ranked 26). Can’t argue with those.

Travel Farther Smarter (TFS) discovered ‘Mexico’s Top 10 foods/dishes’. You can see which ones made the list by visiting – www.bbcgoodfood.com/howto/guide/top-10-foods-try-mexico. Mexico has quite the history regarding its culinary origins. According to Wikipedia, the delectable and mouthwatering food started over 9,000 years ago. It is a mixture between a variety of Mesoamerican cultural influences. 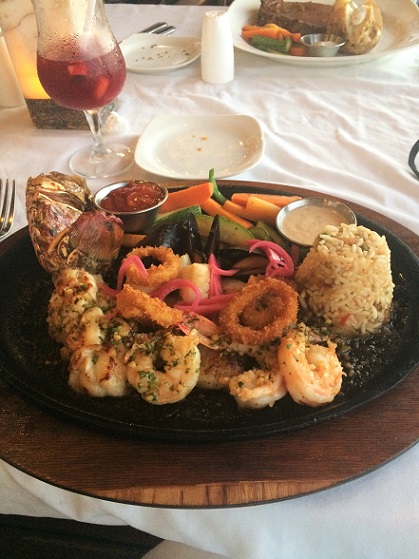 One of Mexico’s biggest contributions to the world is its culinary creations. Finding someone who doesn’t like Mexican food is a rather difficult task. Have you ever had the opportunity to experienced good Mexican food? I am not talking about Taco Bell or El Pollo Loco or any other Mexican style fast food chain. 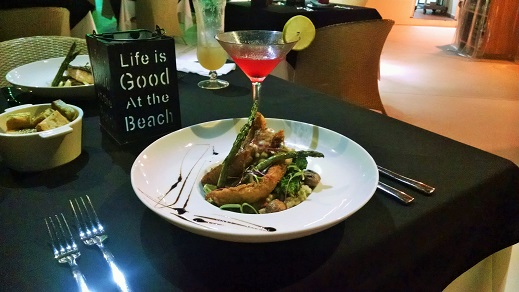 Mexican food isn’t just tacos, burritos and nachos. It dishes that consist of all types of meats – white and red, imported spices and other fresh ingredients. 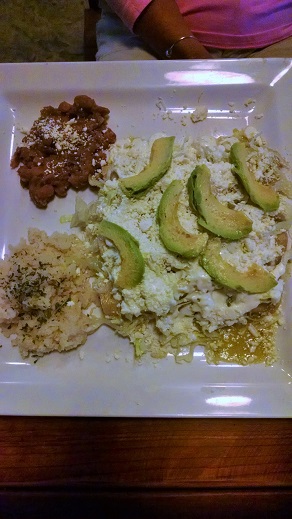 As boasted on CNN Travel, “They Celebrate the best cultural foods and lambaste the others”. Mexico’s unique cuisine is not only tasty, but quite healthy for you as well. The ingredients include peppers, avocados, limes and plenty of beans that provide you with an abundance of antioxidants, proteins and other nourishing vitamins and minerals. Not only does Mexican food taste great, it’s also good for you!” What more do you need? 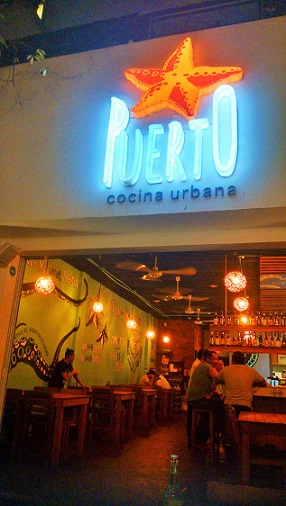 The likelihood of getting authentic prepared Mexican food from a corporate chain or fast food joint is very unlikely. Instead, you need to search out places that are tucked away in inconspicuous side streets or not-so fancy looking buildings displaying fancy logos and signage.

The only other option is to visit Mexico itself. Which is by no means a bad decision. Some of the most tasteful dishes Travel Farther Smarter has experienced were prepared by family owned and operated restaurants in areas that are not-so touristy. Its all in the family recipes!

As stated on CNN’s Travel site, Tacos – soft shell and Fajitas – mixed meats, are among such dishes as India’s Masala Dosa (crepes), the UK’s Fish & Chips, and Peking Duck from China as being some of the best foods in the world. Mexico also has many freshly prepared foods that most people have never tried, let alone heard of. Such dishes as: 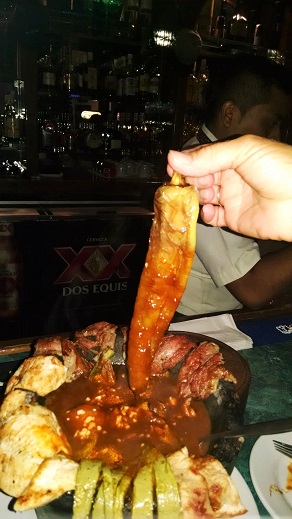 Mole – pronounced Mol-eh’), is a sauce that is made up of approximately 20 ingredients that include Mole Poblano Chili. It is deep brown in color and is poured over a variety of prepared foods.

It can also be served in a pestle like bowl with the ‘Mole Poblano’ chili itself in the sauce – shown in the photo. A variety of meats lining the rim are used to dip into the tantalizing, but very spicy sauce. 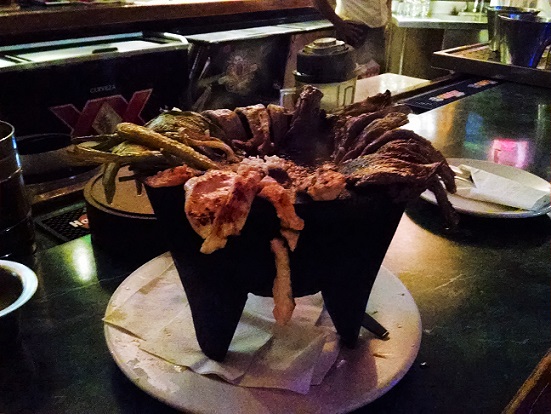 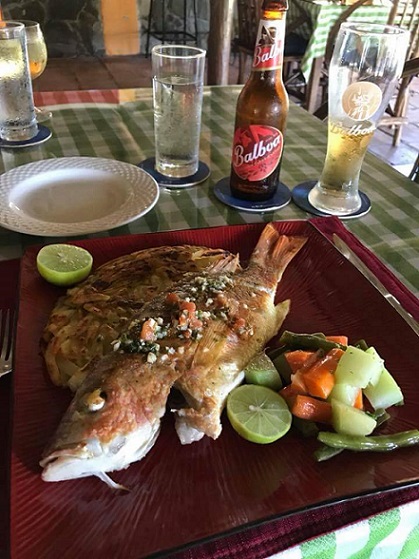 cuisines. The more commonly known Mexican foods that we might also be familiar with are tamales, tostadas and guacamole with chips to mention just a few. Mexico uses all the major food groups to create their delicious dishes. However, poultry, pork and seafood seem to be the more popular main course choices.

The deep fried fish platter – Pescado Frito (shown left), is only one of the culinary delights that gives Mexico its world recognition. And let me tell you that it is absolutely delicious! 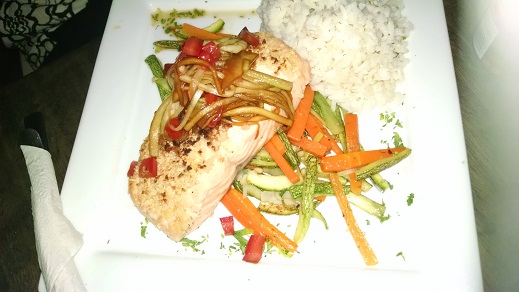 Mexico serves their seafood fried, baked or grilled – shown above, with veggies and rice and/or choice of beans. You also have the same choices when ordering beef, chicken and pork as well.

Anyone who hasn’t taken the time to try authentic Mexican food is sincerely missing out. Mexican food has its own unique taste and cannot be imitated. Once you have tasted the nectar, you will be hooked for life! We at Travel Farther Smarter can’t get enough of it. 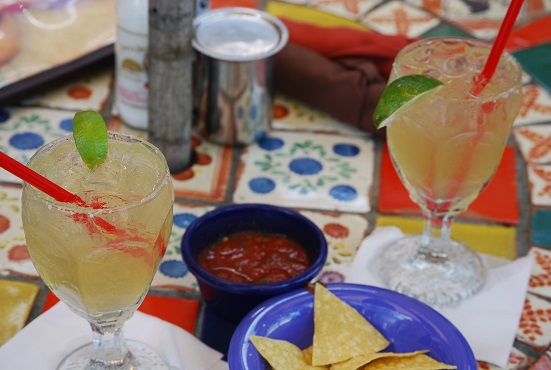 Every cuisine has a drink that complements your dining experience. Mexico has several adult beverages that are well known. The more common ones are cerveza (beer) and a margarita. If you you enjoy an ‘after dinner cordial’, a shot of tequila made from 100% blue agave is a perfectend to a perfect meal.

Adding colorful decor and traditional Mexican music creates an element of ambiance that brings Mexico and its cultural flare to your dining experience. Like we say in Mexico, “Disfrutar!” (Enjoy). 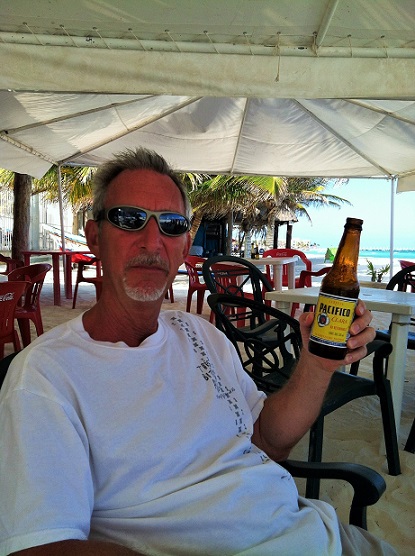