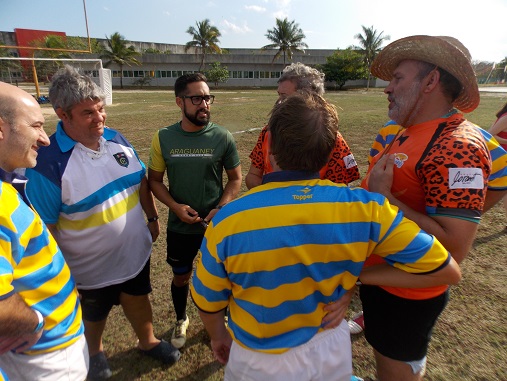 The Press Release announced that the Argentina Rugby Club the Hindu would be coming to Playa del Carmen. Arriving in Cancun and touring the area, a Rugby match between Mexico City’s Senior Jags and the Hindu Rugby teams was appropriately arranged. The promotional game will be held in Playa del Carmen at the Mayaland School playing field on April 22, 2017.

The Jaguars belong to Mexico’s Mequiztli Rugby Union League and were champions in the 2001 -2002, and 2003 – 2004 seasons. They will be supported by one of the founding Captains Eugenio Aburto. This will be a big boost in gaining more recognition for Playa del Carmen’s Rugby team. They will be playing Senior Rules or Rugby Data. 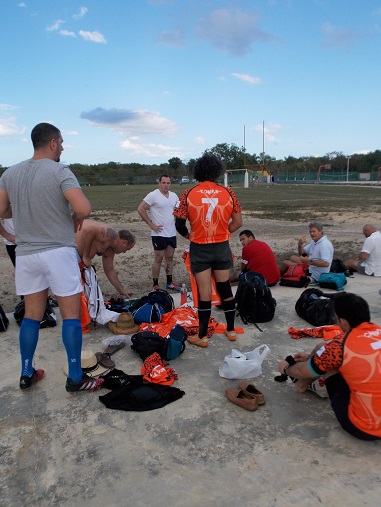 When this exciting event was scheduled to be played in Playa del Carmen, You, Me and The Dock Travel Site was invited and allowed the privilege to photograph and video the event. The Old Jags – pictured right, were preparing to do battle with a very talented and experienced Argentina team.

The three separate videos that are placed within the article give a true-to-life sideline view. The players are not showboating or acting for the purpose of being noticed. They are concentrating on the game and not on the camera. 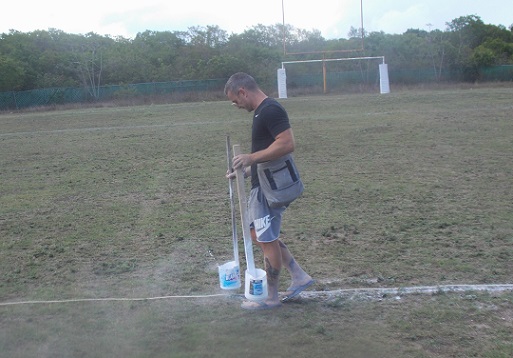 Shortly after that the Argentina team started to show up. The players intermix with one another. Many of the guys had met before during league matches and some have actually played on the same team. It was a reunion of sorts. 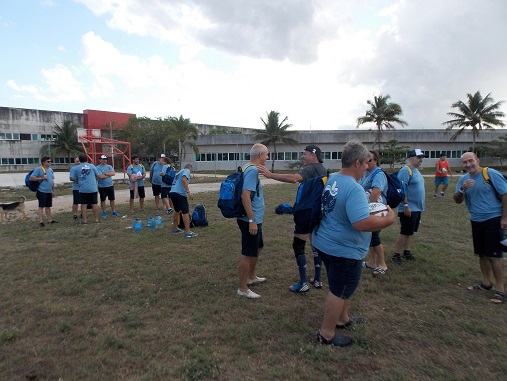 Many of these guys have met in past matches or have played alongside each other. The camaraderie was amazing between them. You would never have known that these guys would be doing battle within the hour. 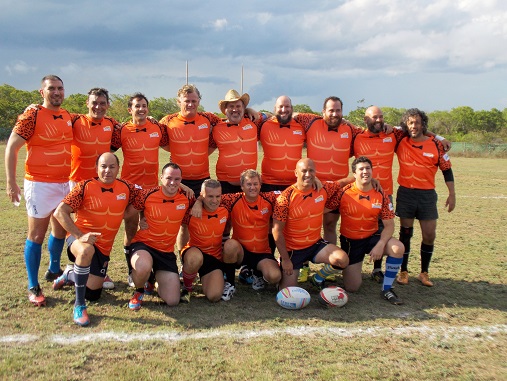 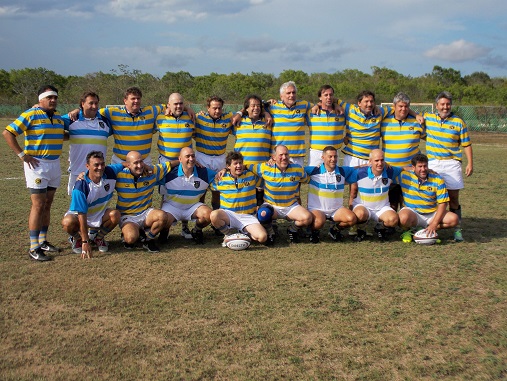 Then the Argentina’s Hindu team did a photo op as well – shown left. The adrenaline started to build as the two opposing teams discussed position assignments and game plans. The atmosphere turned from casual to serious within seconds. It was game on. 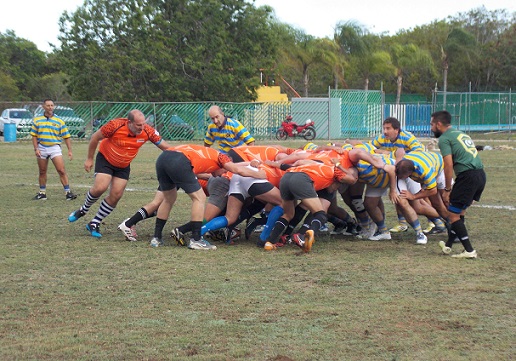 The first half starts with the Jags kicking to the Hindus. The Argentines start passing the ball laterally as they sprint down the field. The object is to run the ball into the end zone which is considered a touchdown. No forward passing is allowed. The only other way you can score points is to kick the ball through the goal post. This is done by bouncing the ball off the ground and then kicking it off the rebound. 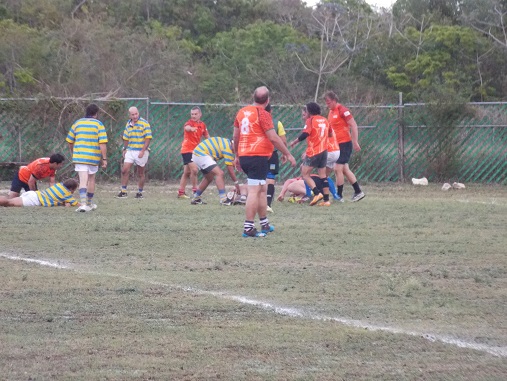 The team who the infringement – penalty occurred to, gets the advantage to throw in and direct the ball to a teammate for advancement in what is called the “Scrum” (pictured above right). It’s a constant open field play until the ball either goes out of bounds, an infringement happens, or someone scores. 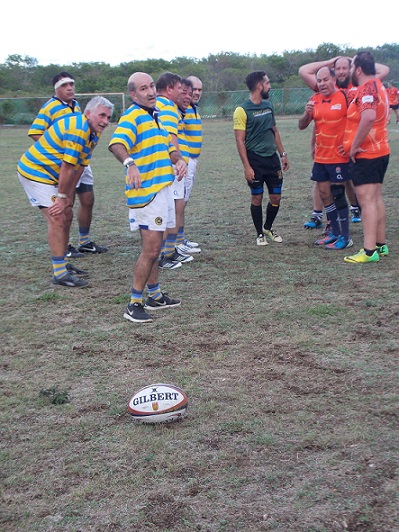 Can you imagine the National Football League players not using pads and helmets? Rugby players tackle, block and run the ball with little to no protective gear on. This is bodies hitting bodies in an open field of play. No huddles to call strategic formations. The plays happen when your side has the ball. 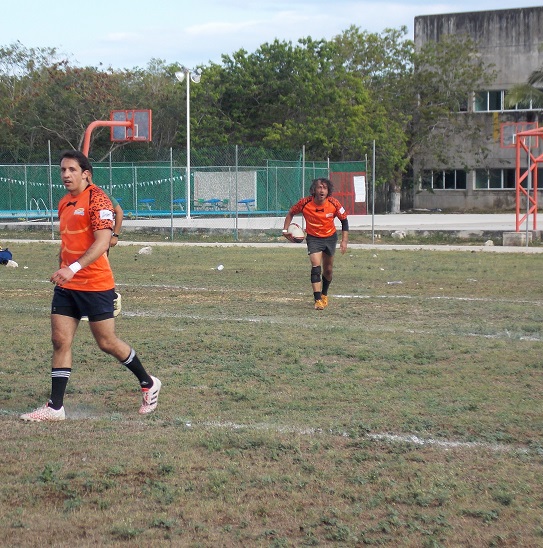 After the ball made it’s way up and down the field, Mexico’s Jags finally scored with a toss and run-in by Eugenio Aburto (pictured left). The score after the first half of play was two touchdowns for Argentina’s Hindu and one for the home team – Jags. 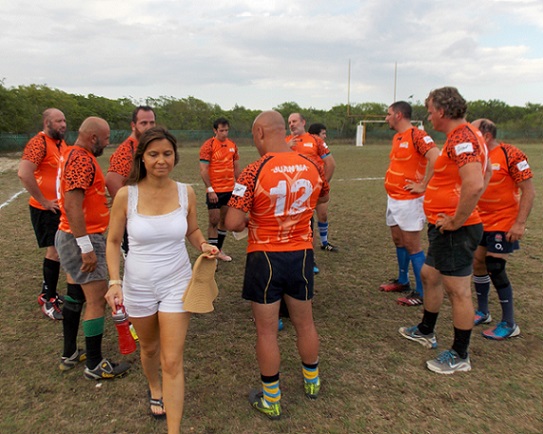 After 45 minutes of play, the teams get a 10 minute water break and quickly talk about their game plan for the second half. The players stand on their sidelines and take a well deserved rest. 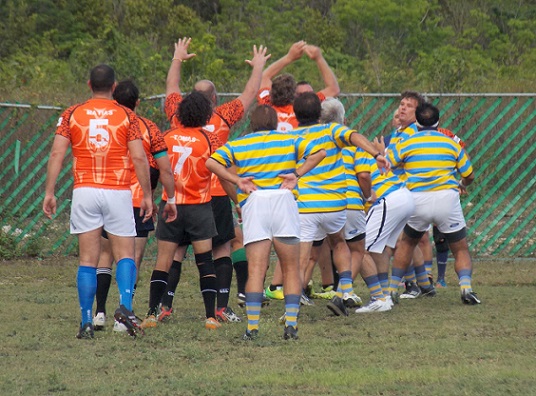 The second half begins with Mexico’s Jags receiving the kickoff. There were several out of bounds fractions. They line up similar to how it’s done in basketball. Then a player tosses the ball to an open teammate. He in turn tosses it to a team member and off they go. 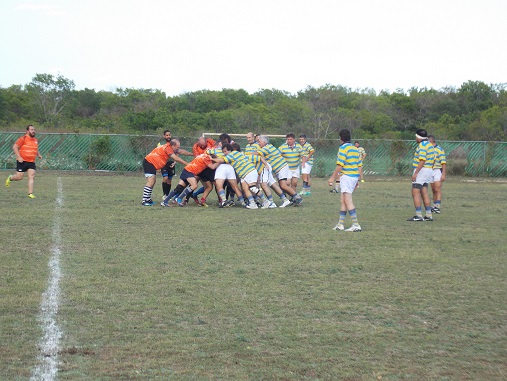 There were also plenty of scrums (pictured right) on both sides of the field. They again marched up and down the field passing and running with the football. After awhile it became very evident that the warriors from both sides were starting to wear down. 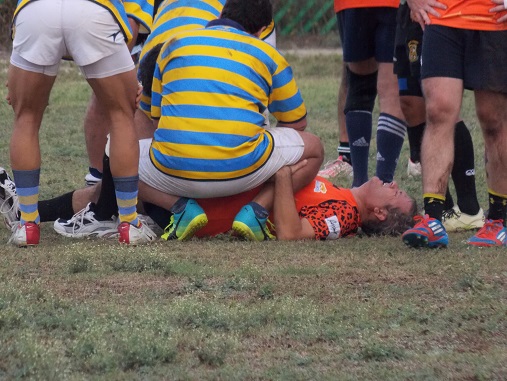 For the first time in the game an injury had occurred. A player for the Jags collided with a Hindu player and twisted his ankle. Its a wonder that something like this hadn’t happened sooner. 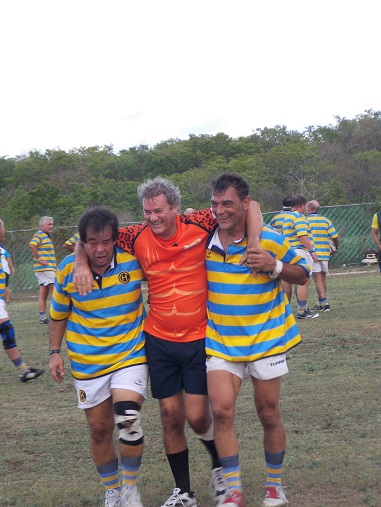 With respect for one another and no matter what team you play for, the camaraderie is instilled into every player. Two of Hindu’s help the injured Jag player off the field.

When the end of the game sounded, the Argentina team had scored a few more touchdowns. However, the Jags made a second half effort and outscored their opponent by two. Both teams played a good hard game. It just wasn’t the visiting team’s day. 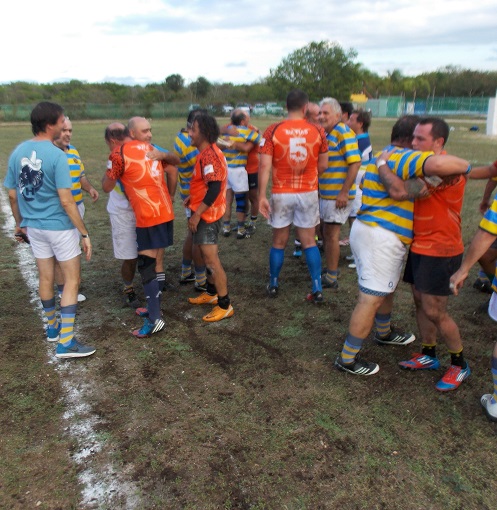 The two teams hugged and congratulated each other on a game well played. They would meet again in just an hour or so at the after game dinner and awards banquet. The beer will flow and stories will be told. 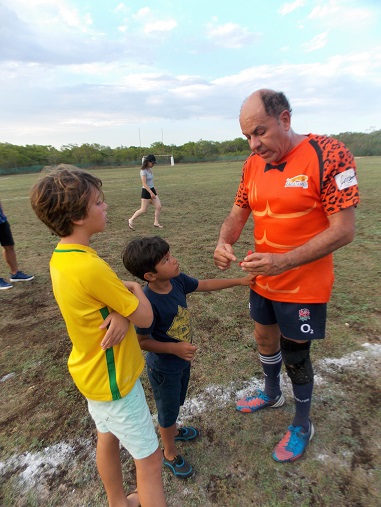 Some of the fans – younger ones, wanted to meet the players and hopefully be just like them one day. Paco from the Jags was more than happy to share his time with these future Rugby players. 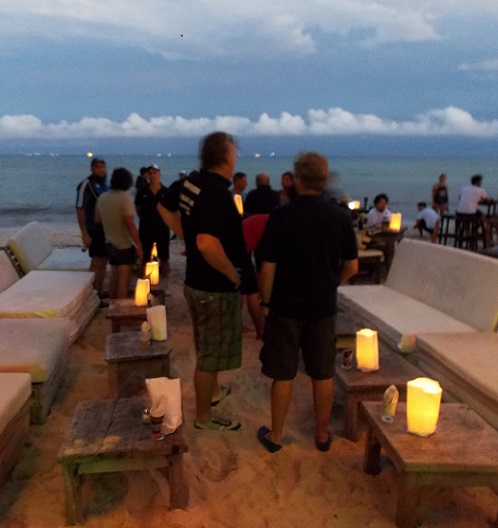 Before the day ended, an awards ceremony was arranged for the visiting Argentina team. It took place at one of Playa del Carmen’s beach bar & grills. Complimentary drinks and food were served.

There are many versions of this hard hitting sport. Rugby – a football related version, is becoming a worldwide sport that is getting recognized as an event to experience. After attending the ceremony between these two teams, I now have more of an appreciation for the sport and what these incredible athletes go through to prove their abilities.

When visiting a country that offers Rugby as a spectators event, take the time to go and see how men play a sport that lends little to no protection in body armor. Its pure flesh and bone on a gridiron of dirt and grass. 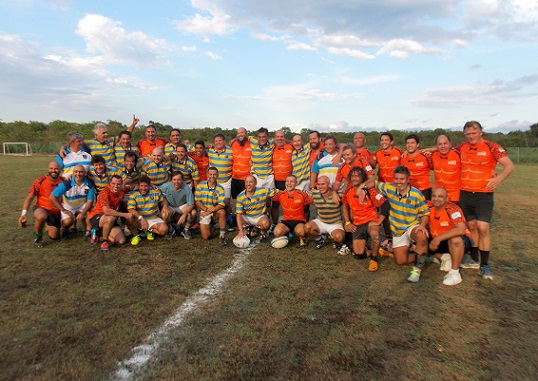